Playing With a Simple Depletion Model 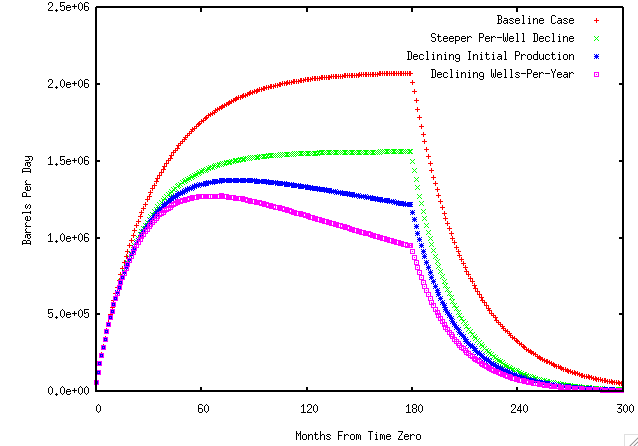 The rest of this discussion is based on the graph shown above, produced from a simple depletion model.  The vertical axis is total production from many wells [2], in barrels per day.  The horizontal axis is months from a time zero, when drilling is assumed to begin.  The red curve is for a hypothetical baseline case that assumes conditions typical of what we are currently experiencing: 125 new wells drilled per month, initial production of 500 barrels per day per well, and a decline rate of 3% per month.  Starting from zero, production climbs steadily, flattening out at about two million barrels per day after 180 months (15 years).  At that point, the production from 125 new wells per month simply offsets the decline in production from the wells that have already been drilled.

The "collapse" shown after 180 months represents what happens to production if you were to stop drilling new wells at that time: an exponential decline of 3% per month.  For example, for a particular field, that exponential decline kicks in when you run out of places to drill.  Some experts believe that a decline rate of 3% per month is too optimistic.  The green curve shows what happens if the rate is 4% per month instead.  Maximum production tops out at only 1.5 million barrels per day, and the decline if/when drilling is stopped is noticeably steeper.

One can make the argument that oil companies will choose the best sites for their initial wells, and that over time the quality will decline.  The blue curve shows what happens if, in addition to using a 4% per month decline rate, the initial production from new wells also declines at 2% per year.  That is, during the first year new wells start producing at 500 barrels per day; in the second year new wells produce at 490 barrels per day; and so on.  In this case, production peaks after about seven years at 1.37 million barrels per day and begins to decline slowly.  New, lower-quality wells don't completely offset the decline of existing wells.

[1] If production from the well is throttled to less than its potential, the depletion rate may be zero for a considerable amount of time.  Eventually, though, production will still decline.

[2] The code for the model drops wells once their production drops below a barrel per day.
Posted by Michael Cain at 8:54 AM