What Does an Energy Survey Tell Us?

Green Car Congress points to a recent study in which survey participants indicated their perceptions about the relative efficacy of various energy-saving actions.  The abstract for the paper makes a large deal out of the observation that when asked which strategies they could implement to save energy, many more people chose curtailment than efficiency.  In other parts of the survey, participants demonstrated a general lack of knowledge about efficiency differences in various activities; for example, that moving freight by rail uses much less energy than moving the same freight by long-haul truck.
Perhaps because I've gotten old and cynical, I am often suspicious of surveys.  It is simply too easy to slant the survey questions, intentionally or not, and affect the outcome.  In this particular case, the paper includes an appendix with the survey questions.  Some of the questions are clearly tests of basic numeracy: if you replace a 100 watt light bulb with a 75 watt bulb for one hour, how many energy units are saved?  (Energy units are watt-hours, although that term is never used.)  Other questions are tests of broad knowledge about energy consumption.  How many energy units would be saved by drying a load of laundry on a clothesline instead of in a dryer?  Rank-order the efficiency of planes, trains, trucks, and ships for freight transport.
The concern — people choosing curtailment over efficiency — would appear to be the result of the very first question in the survey: "In your opinion, what is the most effective thing that you could do to conserve energy in your life?"  I have two complaints about drawing conclusions from this question.  The first is that it is the first question in the survey.  IMO, this should have been the last of the energy-related questions.  Placed first, and phrased the way it is, I think people would be inclined to think in terms of what changes they could make in their day-to-day activities that would save energy.  If that is the case, it is not surprising that answers like "turn off the lights", "turn down the thermostat", and "drive fewer miles" would be most common.
In practice, the things that are most effective are matters of efficiency and all require up-front investments.  Improving mileage from 20 MPG to 30 MPG requires purchasing a new vehicle.  Improving appliance efficiency means buying new appliances.  Once you have done the simplest weatherizing activities, improvements require major efforts such as replacing windows or insulating walls.  For renters, many of these are simply not options.  For the poor, investments are always difficult: the fact that a new $750 refrigerator will save more than that in energy costs over five years is immaterial if you don't have $750 in cash or credit available to you.
The same investment problem arises when you look at things like freight transportation.  Rail is much more efficient that long-haul trucking.  But the trucking industry provides scheduled service: load the trailer in Denver today, and the trucking company promises to deliver it to St. Louis the day after tomorrow.  Railroads no longer operate scheduled freight trains.  Load the boxcar in Denver today, and the rail carrier will deliver it to St. Louis when they can assemble a full train going that way.  Maybe tomorrow, maybe next week.  Either the railroads must invest in the equipment to allow them scheduled service, or businesses must invest in inventory.  Given the rise of just-in-time supply chains, and the decision by the railroads to give up scheduled freight service, businessmen simply don't think in terms of "I could switch from truck to rail for shipping."
I think the important result of the survey is not the matter of ignorance raised by the authors, but rather that the results demonstrate the participants' aversion to investment.  Politicians, whatever their other faults, are generally shrewd judges of their constituencies.  Much of the insanity in current US energy policy debate is because the politicians understand voters' aversion to having to make personal investments in efficiency.  One of the things that makes ethanol attractive, politically, is that it holds out the hope that people won't have to buy new cars.
The two biggest challenges in getting sane energy policy implemented are (1) convincing people that large personal investments are necessary and (2) settling on which investments are the ones that need to be made.  Most of the debate today involves (2); but (1) is likely to be more difficult to accomplish.
Posted by Michael Cain at 11:11 AM No comments:

Who Will Tend the Wind Turbines?

For the purposes of a book I'm trying to write, I had two maps of the United States laid out side by side the other day. These two maps are reproduced below, one above the other. The first is onshore wind power potential at 80 meters, from the National Renewable Energy Laboratories in Golden. The second is the percent change in population from 2000 to 2009 on a county-by-county basis, from Census Bureau data. In the first, the lavender and purple areas of the Great Plains are the best wind resources. In the second, the purple areas are counties that lost population. The correlation is not exact, but is certainly there. 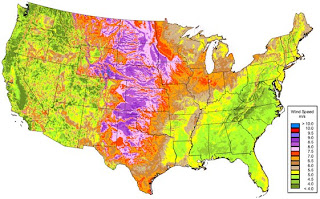 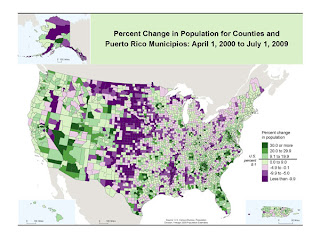 Clearly, if the US is to use onshore wind power in a large way, the wind farms are going to built on the Great Plains. Consider the broad characteristics of such a system. The US consumes about 3.9 billion MWh of electric energy each year. Assume that we could eliminate half of that through efficiency and demand management, and that we want to generate half of the remainder from wind. More assumptions: 3.0 MW wind turbines, generating the equivalent of full-power one-third of the time, so 8760 MWh per turbine per year. Do the simple calculations and you get an estimate of about 110,000 turbines.

That figure is too low if reliability is considered. What is really needed is a figure for the number of turbines that need to be installed if we want to produce a certain level of power for a large percentage of the time. For example, based on the above numbers, we might specify that we want to produce at least 110,000 MWh of electricity during 95% of all daytime hours in the year. That's a much more complicated number to estimate depending as it does on a number of probabilistic variables. For our purposes, though, assume that another 50% is sufficient. That raises the required number of turbines to 165,000. (I suspect that number is still too low, and am looking for any work that has been done on stochastic models that would yield an answer that is not just a guess.)

One of the big knocks on wind power has always been that it's intermittent. Given enough turbines (and 165,000 is our guess at "enough"), much of that problem can be addressed by geographic diversity. Scatter the turbines from the Canadian border to the center of Texas, spread them out over hundreds of miles from west to east, and it becomes feasible to produce power at a fairly steady rate. Connect the turbines to a large north-south AC grid. Connect high-voltage DC transmission lines to that grid sending power most of the way to both the East and West coasts. All of that is technically feasible. There may be financing problems, or problems acquiring the volume of rare-earth magnets needed for that many 3.0 MW generators, and so forth. But the concept is straightforward and all of the engineering is feasible.

There is, OTOH, a heck of an operation and maintenance problem to deal with. For example, if turbines have a 30-year expected lifetime, roughly 5500 of them will need to be replaced each year. All the turbines, the entire AC grid interconnecting them, and the source end of the HVDC links are scattered broadly across the Great Plains, an area that is rapidly depopulating. How do we attract the technicians, engineers, project managers, and all the other skilled labor to work and live in that area? An engineer with a spouse and children is going to ask difficult questions. What are the quality of the schools? Who will straighten my children's teeth? Where will my spouse work? How good are the hospitals? How far is it to the nearest cardiac specialist, or neurosurgeon, or orthopedist? In the interior portions of the Plains, the answers to those questions are generally dismal, and getting worse.

Construction of this very large new infrastructure is likely to bring other problems to the rural areas. The West has seen the same pattern play out repeatedly when a new energy resource is developed: the sudden influx of "outsiders" is followed shortly by large increases in drug availability, prostitution, and various violent crimes that the local authorities are ill-prepared to handle. Local infrastructure such as roads is battered to the point it breaks down. There is no reason to believe that building hundreds of wind farms across the Great Plains will be any different. Again, these are not conditions that make it easy to attract skilled labor.

To sum things up, it may be technically feasible to build the wind-power infrastructure necessary to provide a large portion of US electricity. The social difficulties of building and then operating that infrastructure look to be much more difficult. Who are the people who will tend the turbines?