One of the problems with the global climate change models continues to be lack of resolution.  Most people who don't live in the US Southwest are unfamiliar with the North American Monsoon (NAM).  It's not as well known as its counterparts in India or Africa, but accounts for a significant amount of the annual precipitation in the northwest parts of Mexico and the southwest parts of the US.  I live outside Denver and the strength of the NAM can have dramatic effects.  The 2011 NAM was pronounced.  It rained at my house every day for the first two weeks of July, which caused me a great deal of anxiety: my daughter's outdoor wedding ceremony was scheduled for July 17, and I was having nightmares of another 6:00 PM downpour [1].  Watering outdoor plants wasn't necessary that month; some of the municipalities around Denver reported water usage was only half of the normal July amount. 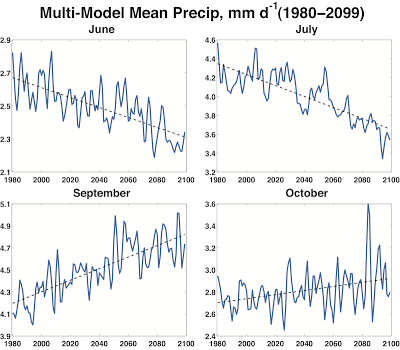 Until recently, the analyses from the big climate models have not addressed the issue of localized climate features such as the NAM.  A paper submitted for publication by Ben Cook and Richard Seager considers the likely consequences to the NAM over the course of this century.  Fundamentally, they forecast a shift in the timing of the NAM -- instead of being a June-July occurrence as it is now, it will become a September-October phenomenon.  The total amount of annual precipitation from the NAM is essentially unchanged.

Agriculture in almost all of the western US has depended on water storage and distribution from the beginning [2] -- in essence, both time- and place-shifting the available precipitation.  Changes in the timing and strength of the NAM might require changes in storage capacity and the timing of releases.  Whether such changes would be a sufficient coping mechanism appears to remain a very open question.


[1] It all turned out well.  The thunderstorms stayed back over the high country that day, and all we got at the wedding was a nice cooling outflow breeze.

[2] Even areas with relatively large amounts of precipitation such as Oregon's Willamette Valley have significant seasonal problems.  Phoenix and Denver are wetter than Portland, at the north end of the Willamette, during the months of July and August due to the NAM.
Posted by Michael Cain at 10:00 PM