From time to time, I come across pieces written by people who describe commercial nuclear power in the US as "our" problem or "our" opportunity, where "our" means all parts of the country.  A couple of years ago I put up a short piece noting that existing US reactors were largely located in the eastern half of the country.  This post continues that thought, with some corrected numbers, and poses the question of whether "our" should realistically be interpreted as meaning the entire US in a nuclear context in the future.  To be blunt about it, I'm going to argue that some parts of the country receive most of the benefits of nuclear electricity; some parts have been expected to accept the long-term problems of nuclear electricity; and the two parts don't align very well.  In the long run, if that misalignment continues, it is apt to be an ongoing source of regional friction.

The largest downside to nuclear power is the problem of nuclear waste.  For the last 25 years, the only site which has been considered for long-term storage of that waste was the proposed Yucca Mountain repository in Nevada.  Other than the area immediately adjacent to Yucca Mountain (which anticipated a local economic boom), Nevada has opposed the siting of the long-term waste repository.  One of the arguments that has been put forward by the opposition is that Nevada should not have to accept the perceived risks associated with transport and storage of the waste when Nevada has received none of the benefits of nuclear power -- there are no commercial reactors in the state.  In 2011, funding for the Yucca Mountain facility was discontinued, and no alternative sites have been suggested.

This East/West contrast seems unlikely to change.  The Nuclear Regulatory Commission published a map, shown to the left, identifying the locations for proposed new reactors [3].  None of those reactors are in the Western Interconnect.  Additionally, of the eight reactors in the West, the two at San Onefre, California have been off-line for the last twelve months and there is discussion about whether those reactors should ever be put back into full-scale service.  Looking forward, then, we see increased rates of waste production outside of the West and potentially decreased rates of production within the West.

Will a new waste repository be sited in the West?  It seems likely that any such proposal would be challenged in the federal courts, probably going all the way to the Supreme Court.  The Roberts court has, this past year, ruled that there are things which the federal government cannot coerce states to do involuntarily -- a philosophical change in direction from the historical trend.  I suspect that accepting large amounts of nuclear waste from other states will turn out to be one of those things.  Which leaves the states of the Eastern Interconnect with a problem.  Not "our" problem in a broad national sense, but an Eastern (and to a lesser extent a Texas) problem. 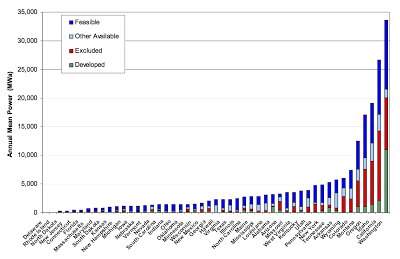 It's fair to ask the question, "Even though they haven't acted yet, won't the West also need more reactors?"  There have been several relatively detailed studies published describing how the Western Interconnect could meet its needs from renewable sources alone.  Several of those start with a foundation of hydroelectricity, with which the West already has considerable experience.  Over the last decade, the Western Interconnect got 20-30% of its electricity from conventional hydroelectric power (depending on how wet the year is).  That's two to three times as much as the West gets from nuclear reactors.  A 2006 DOE report (PDF) considered, among many things, the amount of undeveloped hydro power in the US, by state, shown graphically to the left (you should be able to do "View Image" or your browser's equivalent to see a larger version).  In aggregate, the states of the Western Interconnect have considerably more undeveloped hydro power than has already been developed.  Yes, a batch of new transmission capacity would be needed to move electricity to the demand centers.  Yes, the availability of hydro power varies somewhat over the course of the year.  And yes, big dams aren't harmless.  But the potential is considerably larger than the current nuclear generation in the West.

[2] These figures are derived from the EIA's annual report on total generation by state and source for 2011.

[3] All NRC licensing decisions are currently on hold, while the Commission completes an environmental study on the impact of high-level radioactive wastes.
Posted by Michael Cain at 9:36 AM