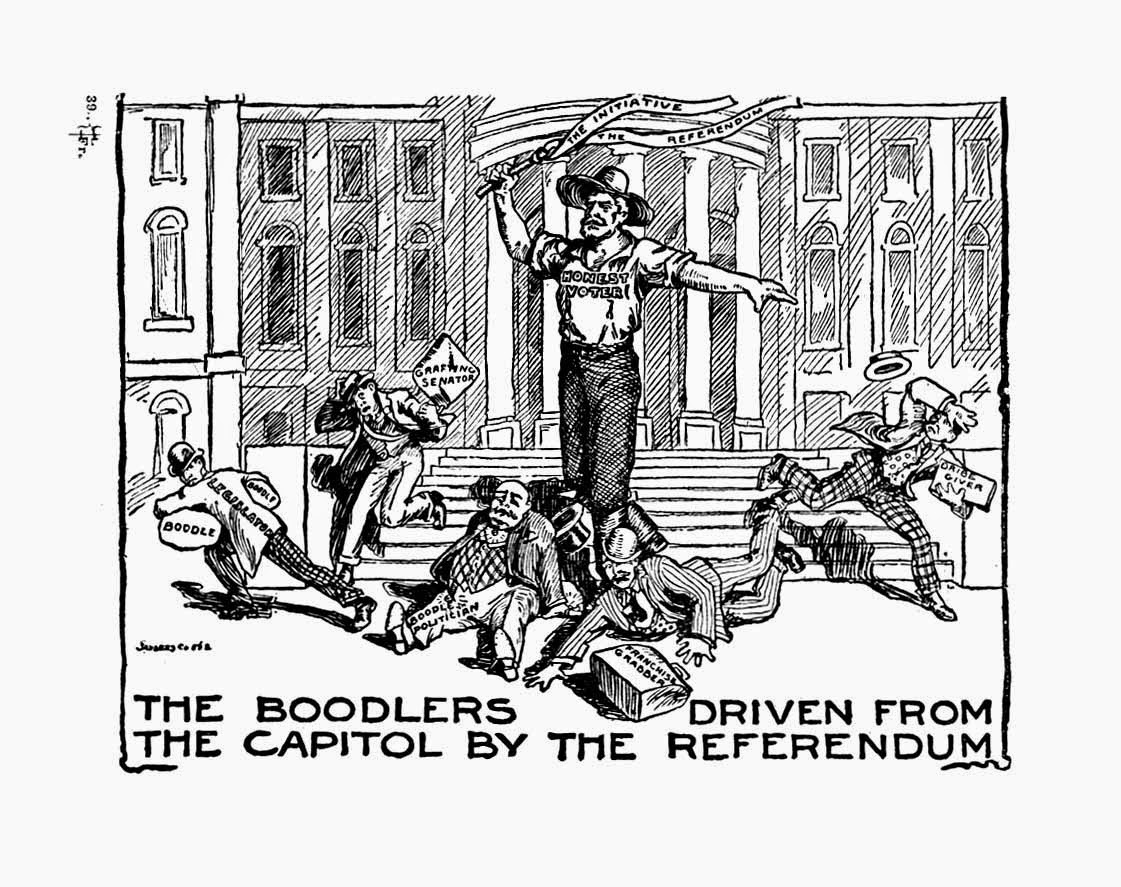 In the early 1900s, at the height of the Progressive movement, most of the states in the western half of the US adopted citizen initiative processes to put statutes, constitutional amendments, or both on the ballot. While some eastern states also adopted such provisions, it is not surprising that the movement was widespread in the West. Citizens in western states believed broadly that they were being exploited by outside interests – read large Eastern corporate interests in particular – and that those interests had purchased control of the state legislatures.


I'm a fan of the citizen initiative. Some of it might be that I simply grew up with initiatives as part of the system. Still, state and local government is a machine, elected officials have to fit into that, and there are things that replacing the individual cogs can't accomplish. Consider the issue of Congressional redistricting which arises every ten years following the decennial census. In Article I, Section 4 the Elections Clause of the US Constitution assigns responsibility for such to the legislature of each state. It would be unusual indeed if a state legislature willingly gave up control of that process [1]. In 2000, by ballot initiative, the people of Arizona approved a change in the state constitution that took Congressional redistricting completely out of the hands of the legislature.

In 2012, after the commission approved a new map, the legislature sued the commission in federal court, arguing that the ballot initiative violated the Elections Clause. Congressional redistricting cases are decided by a special federal court; the three-judge court split 2-1 and rejected the challenge, upholding the validity of the citizen initiative. The main precedents cited were Ohio ex rel. Davis v. Hildebrant and Smiley v. Holm, where the courts had interpreted the Article I Section 4 "legislature" to mean the legislative process as determined by the individual states. The Supreme Court heard oral arguments on the Arizona case in March this year. The expert consensus is that the justices seemed inclined to find that "legislature" should be interpreted more narrowly to mean only the elected legislative body (eg, this piece at SCOTUSblog).

The Arizona case is not the only initiative-related case potentially before the Supreme Court this term. In 1992, Colorado passed the Taxpayer Bill of Rights (TABOR). Among other things, TABOR takes away the state legislature's power to raise existing tax rates or introduce new taxes on their own; the legislature can only refer such measures to the voters. In 2011 some members of the Colorado state legislature sued in federal court, arguing that taking away the legislature's power to control taxation violated the constitutional requirement that states have a republican government. The district court found that the situation was sufficiently different from historical precedents to proceed with a trial [2]. That opinion was upheld by the appeals court, and has been appealed to the Supreme Court. To date, almost five months after materials were distributed to the justices, no decision has been made as to whether to grant certiorari.

If I wear my natural western-populist hat then I want the Court to rule in favor of the people in both cases [3]. I expect that me to be disappointed.

If I wear my paranoid "of course the Supreme Court is partisan" hat then I would expect them to simply rule against the people in Arizona and for the people in Colorado, because the Arizona suit was brought largely by Republican legislators and the Colorado suit largely by Democrats. I expect that me to be disappointed as well.

The reality will be, I expect, rather messy. When the Founders wrote the Constitution, they pretty clearly saw no role for the voters once they had chosen their representatives. It seems unlikely, though, that after a hundred years the Court would decide that initiatives are simply not allowed. That leaves them in the position of trying to draw lines with regard to how much this "fifth branch" of government can do [4]. And line drawing always seems to be messy.

[1] In 1983, the Washington State legislature referred an amendment to the people that created a largely-independent redistricting committee. The proposal didn't remove the legislature from the process entirely, as they can still overrule the committee if they can get a two-thirds majority vote in each chamber.

[3] Full disclosure: when I was a budget analyst for the Colorado legislature, TABOR made my job a lot more difficult. However, when the state faced a real budget crisis in the early naughts, the legislature referred a ballot issue granting limited relaxation of the TABOR limits to the people, and the people approved it.

[4] I would say "fourth branch", except that's been pretty much taken to mean the regulatory bureaucracy.