Today is the day that the State of Alaska is releasing the e-mail messages from Sarah Palin's tenure as Governor.  News organizations that have requested a copy have to send someone to Juneau to pick up the paper copy, some 24,000 pages in total.  Geekdom in general is outraged.  Paper?  Travel to Juneau?  Why can't anyone who wants to just download the file?  Defenders of the action have pointed to limited bandwidth, the cost of server capacity, and so forth.  I think the reason is completely non-technical.

I spent three years on the permanent legislative staff for the General Assembly of Colorado.  Part of that job was interpreting what a variety of state laws actually meant in practice.  So my initial response was to pull up a copy of Alaska's open records law to see what it said.  Here's the first paragraph:


Unless specifically provided otherwise, the public records of all public agencies are open to inspection by the public under reasonable rules during regular office hours. The public officer having the custody of public records shall give on request and payment of the fee established under this section or AS 40.25.115 a certified copy of the public record.

"Open to inspection" usually means that you can look at a paper copy.  In most states, agencies are not required -- or even allowed -- to give the public access to their file cabinets, microfiche readers, or computers.  "During regular office hours" usually means that the requester has to come to the agency in order to perform that inspection.  But the real kicker is that phrase "shall give... a certified copy".  As a general rule, the word "shall" means that it's a requirement: any copy that leaves the agency premises must be certified.  And certified, while less demanding than notarized, generally means some identifiable mark added to the copy that indicates someone at the agency says the copy is accurate.

Is a file downloaded over the internet certified?  Almost certainly not.  Consider the site where I obtained the copy of the open records statute.  Not only was it not certified, but there were multiple statements to the effect that, despite their best efforts, there was the possibility that the copy was inaccurate.  The Alaskan state agency doesn't appear to have that choice -- they can only distribute copies whose accuracy they certify.

How about a write-once CD?  A better chance there.  At least it's a physical medium and can have a physical sticker (or whatever) on it.  There's still a potential problem in that the CD contains thousands of individual documents (e-mail messages).  Can a single certification cover all of them?  Someone in Alaska has probably decided that question.  I don't know the answer, but I would guess that each "document" has to be certified, at least in a "page n of m" sense.  Internal to the agency, I would worry about control of the process, though.  The CD is a copy of one (or thousands) of computer files.  How secure was the process that accumulated the files so that a master CD could be created?

Which pretty much leaves paper.  The sheer unwieldiness of the medium makes it easier to lock down the process by which the certified copy is created.  Multiple people involved in changes.  Locked doors.  If need be, numbers added in blue ink by hand.  Far from the ideal solution -- and I expect that there are a number of people inside the Governor's Office that are saying "This is so stupid!" -- but known to keep you within the requirements of the statute.

Can dishonest manufacturing ruin a sport?

There have been numerous reports of Chinese export products that are flawed in ways that are dangerous.  Many involve low-end inexpensive goods -- cadmium in cheap children's jewelry, contaminated materials in dry wall boards, etc.  This post is about a small but relatively expensive product line that, at least potentially, affects me more directly.  It relates to public policy in the sense that international sporting bodies make international policy.

I'm a sport fencer.  Epee, if it matters, as I don't care for the right-of-way and limited-target rules that foil and sabre have, but that's a subject for a different day.  Fencers have to put a lot of trust into their safety equipment.  Most of the standards for equipment were significantly upgraded after the "Smirnov incident": Vladimir Smirnov, a Russian fencer, died from an injury he received during the 1982 World Championships.  The standards are set by the Fédération Internationale d'Escrime (FIE).  They're not rich enough to test on a continuous basis, so an honor system is used.  A manufacturer submits samples for testing, along with a check to cover the testing costs.  If the samples pass, then the vendor can mark the equipment as conforming so long as they do not change their process or materials.  If such changes occur, the vendor will have to submit new samples (and another check).

Many elite fencers use protective masks that have a plastic visor in place of a portion of the traditional wire mesh.  The visor allows for better visibility than the wire mesh.  In addition, the International Olympic Committee (IOC) at one point threatened to drop fencing events (fencing has been in every modern Olympics from the beginning) because the wire-mesh masks rendered the competitors anonymous to the crowds.  There are a number of material and manufacturing standards to which a visor mask must conform.  In November 2009, at the Junior World Championship, a visor failed catastrophically.  In February 2010, the FIE took the extraordinary step of banning visor masks in FIE-sanctioned foil and epee competitions.  Most national fencing bodies followed suit.  A picture of the mask with the broken visor is shown here. 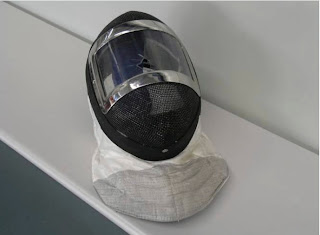 The mask was branded by Uhlmann, a prestigious German firm.  Some years back, Uhlmann outsourced much of their manufacturing to China.  A forensic engineering analysis of the failed mask uncovered a number of disturbing things:
There are a number of other ways that a manufacturer could build "fake" high-end fencing gear.  FIE-qualified epee blades are made from an expensive maraging steel alloy and stamped with an FIE mark.  Forging the mark on non-maraging blades is easy enough to do, and only a metallurgical lab is going to be able to tell the difference.  Similarly, testing the cloth used for the protective garments is destructive: how much pressure does it take to actually put a hole in the material?

You have to believe that Uhlmann was as surprised by this as anyone.  As I said, their brand name is prestigious, and they charge high prices.  I suspect that the CEO of the Chinese manufacturing company would be surprised: suitably high quality products built at lower cost is how he/she grows the business.  But what do you do if you're the FIE?  Give up on trying to provide qualified equipment entirely?  Or ban equipment manufactured in certain countries?  Neither one is likely to be palatable to the IOC, who asserts that they foster international cooperation and athlete safety.  Can dishonest equipment manufacturing threaten to cost a sport it's Olympic status?