One of the nice things about living in a high-altitude semi-arid climate is that, except for a small number of days per summer, it cools off nicely when the sun goes down.  So while it may be 95 at 2:00 in the afternoon, overnight it will drop down into the 60s.  As a result, it's possible to use a whole-house fan and opening and closing windows appropriately to maintain the internal temperature of the house within a relatively narrow range: say 66 to 76 °F for most of the summer.  For those not familiar with a whole-house fan, it's a large fan that sucks air from the house's living space into the attic (where it is vented to the outside), drawing relatively large volumes of outside air through open windows.

The usual control mechanism for a whole-house fan is an on-off timer and a high-low switch.  You set the speed to high or low, then twist the spring-driven timer to set the length of time the fan should run.  A certain amount of guesswork is involved in setting things before you go to bed.  Err to one side and you wake up with the house warmer than you would like: you ran the fan on low, but it should have been on high.  Err on the other and it can be a tad on the brisk side: a cold front went through and it's 56.  A year-and-a-half or so ago, my wife decided that she wanted more control over how the fan behaved.  It should be capable of switching speeds, shutting off if things got too cold, etc.  As no such controller appeared to exist commercially, I was charged with building one. 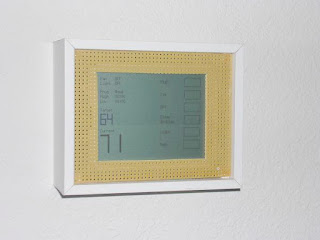 The result was The World's Most Sophisticated Whole-House Fan Controller™.  Yes, it appears crude, but with a touch screen, a temperature sensor, and everything controlled by software, it can do many different things: multiple operating modes, the ability to reconfigure the button layout if you're left-handed, and a wireless remote control to name some of them.  If you include my hours at a reasonable rate, it probably also qualifies as The World's Most Expensive Whole-House Fan Controller, but that's not the subject of this post.  So, if that's not the point, then what is?

First, I suppose, is that it works.  No more 56-degree mornings.  And in some modes, the software decides how long to run on high before shifting to low while still having a good probability of reaching the desired temperature.  Certainly I have a much better idea when I go to bed of what the temperature in the house will be in the morning than I did before.

Second is that the device is characteristic of the sea change that has happened with control applications over the last 15-20 years.  The device consists of a single-chip microcontroller, some sensors, and a few actuators.  Everything else is software.  While that provides a great deal of flexibility, it also means that the whole approach is dependent on the continued availability of large-scale integrated circuits.  In the near term, that's not a problem.  In the longer term, with constraints on energy availability, limits on the scope of trade, preserving the production capability may be more difficult.  Certainly if you believe in anything approaching the Mad Max scenarios, integrated circuit fabs will disappear quickly.  Are we building ourselves into a corner?

Third, and this is mostly whining, concerns the fact that it looks... tacky.  The problem of mounting the various parts in a good-looking enclosure is, in fact, one of the most challenging parts of hobbyist projects like this one.  What I would have liked to buy was the LCD panel and touch screen all mounted in a nice plastic box.  One where everything was properly centered and aligned, and with enough room behind the display for the small custom printed circuit board.  Granted that this type of hobbyist market is small — how many times was I told that I shouldn't be building a box to mount on the wall, I should be writing a smart-phone app to control the fan? — but it seems like it would be big enough to support such a widget.
Posted by Michael Cain at 4:03 PM