On the day after Christmas, the NY Times published a Paul Krugman column titled "The Finite World."  From that column (all emphasis mine):


Oil is back above $90 a barrel. Copper and cotton have hit record highs. Wheat and corn prices are way up. Over all, world commodity prices have risen by a quarter in the past six months....

What the commodity markets are telling us is that we’re living in a finite world, in which the rapid growth of emerging economies is placing pressure on limited supplies of raw materials, pushing up their prices. And America is, for the most part, just a bystander in this story....

So what are the implications of the recent rise in commodity prices? It is, as I said, a sign that we’re living in a finite world, one in which resource constraints are becoming increasingly binding. This won’t bring an end to economic growth, let alone a descent into Mad Max-style collapse. It will require that we gradually change the way we live, adapting our economy and our lifestyles to the reality of more expensive resources.

Is Dr. Krugman's prediction that there won't be a collapse, that we'll just gradually adapt our lifestyle, a reasonable one?  Almost 40 years ago, The Limits to Growth made predictions about possible outcomes based on a finite set of resources.  The following chart illustrates the standard run of the world model used in Limits (from The Limits to Growth: The 30-Year Update, used without permission).  The standard run shown in Limits has stood up remarkably well over the nearly 40 years that have passed since it was originally published [1].  The standard run prediction is that there will be a collapse in industrial output, that it should begin in another few years, and that by 2035 or so the global per-capita output will have fallen by more than half. 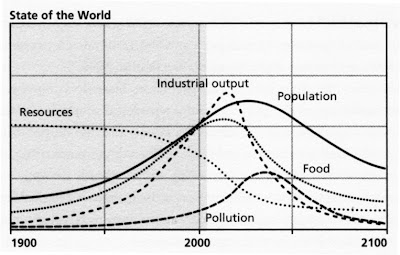 These two very different views are not necessarily inconsistent.  The Limits view is global, while Dr. Krugman's is specific to the US.  The effects of a collapse are unlikely to be distributed equally around the world.  For example, the US is a very large exporter of food (measured in calories), while almost all countries in Africa are net calorie importers.  Decreased US food production may result in changes in diet, but is unlikely to cause famine in the US (the Krugman prediction).  The corresponding decrease in US exports could, though, leave Africa unable to acquire enough calories to feed its population with widespread famine as the result (the Limits prediction).  This situation would be particularly true if an export-land model effect holds for food as well as other natural resources.  Such an effect would result in US net exports of calories declining at a rate much faster than the decline in production.

Dr. Krugman's prediction also conflicts with the global predictions given in works such as Michael Klare's Resource Wars [2].  In Klare's view, the world will see actual "hot" wars fought over access to resources: oil, water, minerals, etc.  US involvement in such wars seems to me to be unlikely for multiple reasons.  The US still has a robust allocation of natural resources, particularly if we were inclined to manage them better.  The US is relatively isolated from much of the rest of the world: other than Canada, Mexico, and parts of the Caribbean, US involvement has to be across oceans.  And finally, I expect the US people to recognize that the large amounts of resources that are needed to support such long-distance conflict might impact civilian availability to a greater degree than making the effort towards self-sufficiency.  Again, Krugman and Klare's predictions are not necessarily inconsistent on a regional rather than global basis.

I expect all of the predictions mentioned above to be "right" to some degree.  I expect hot wars over natural resources.  And I expect a fairly rapid decline in global food and industrial production.  But I expect the US to stay out of foreign entanglements, and that the decline in production of critical goods and services in the US to be modest, successfully handled by Krugman's "adapting... our lifestyles" approach.  At least for sections of the US; it seems entirely possible to me that areas of the US that have high populations and smaller allocations of natural resources will have problems.  But more on that another day.


[1]  Graham Turner, A Comparison of the Limits to Growth With Thirty Years of Reality, CSIRO, June 2008.

From time to time I leave comments at The Oil Drum based on my experience as a member of the Colorado legislature's budget staff. Recently, Jeffrey Brown (westexas at TOD) asked me to write a piece about the likely outcomes of the current state budget crises. For various reasons, it ended up being posted as a guest piece at Gail Tverberg's Our Finite World blog, and reposted at the Energy Bulletin (Post Carbon Institute). Just to be complete, I'm reposting it here.