Yesterday I posted a bit about the substantial differences in both the amount and type of sources used for generating electrical power in eastern and western states[1].  The take-away -- or at least, what was supposed to be the take-away -- was the need for substantially different energy policies for East and West.  Of course, once I had written that something would happen, it turns out that that something is already happening, so I look uninformed at best and stupid at worst.  Well, it's not the first time that it's ever happened to me, and is unlikely to be the last.

In July, the federal EPA finalized its Cross-State Air Pollution Rule (CSAPR).  Beginning in January of 2012, this rule requires 28 eastern, midwestern, and southern states to reduce power plant emissions -- primarily coal-burning power plants -- of some or all of sulfur dioxide, nitrous oxides, and fine particulate matter[2].  Of the 48 contiguous states, those excluded are my 11-state West, the two Dakotas, the six New England states east of New York, and Delaware.  This is not to say that the excluded states don't have air pollution problems; they are excluded because their emissions don't contribute to violations of air pollution standards in other, downwind, states.  The EPA will issue a federal implementation plan for each state; states may replace the EPA's plan with a different state plan that achieves the same reductions.

Power generators in many states oppose the CSAPR; those of Texas seem to be particularly incensed.  Part of the opposition to the rule is due to the increased costs that will be forced on operators of the coal-fired plants, which will presumably result in higher prices for consumers (or lower profits for corporations, depending on what state regulators do).  This is an example of the "austerity" that I asserted would be forced on the East, but not the West, due to the East's much heavier dependence on coal-fired generation.  But Texas is concerned not just about prices.  The Texas Public Utilities Commission requested that the Electricity Reliability Council of Texas (ERCOT) examine the consequences of CSAPR on reliability of the electricity supply.

ERCOT released its report [PDF] last week.  ERCOT is concerned that CSAPR will result, at least in the short term, in decreased availability of electrical power.  In their worst-case scenario, in which Texas generators are unable to obtain sufficient supplies of low-sulfur coal from Wyoming, generating capacity is estimated to be reduced by 3,000 MW in April-May, by 1,400 MW in January-February and June-September, and by 6,000 MW in October-December.  ERCOT believes that if CSAPR had been in force this year then it would have been necessary to impose rolling blackouts on some days in August.  That's another, less pleasant, form of austerity.

The EPA's acid rain reduction program in the 1990s, which achieved quite large reductions in emissions of sulfur dioxide from coal-fired plants, is often used as a "poster child" for cap-and-trade programs.  The CSAPR differs from that program in two important particulars.  Trading in emission allowances between states will be significantly restricted.  And when the program was put in place in the 1990s, generators were allowed multiple years to prepare before the reduction program began.  ERCOT points out that the short timetable for CSAPR makes it difficult for generators to use some options.  For example, one of the unexpected outcomes in the 1990s was the large expansion of coal mining in Wyoming's Powder River basin, and the corresponding expansion of the railroads' ability to move large amounts of Wyoming coal to eastern power plants.  A large increase in either capacity is unlikely to be possible by the beginning of 2012.

CSAPR addresses some of the "easy" pollutants emitted by coal-fired generating plants.  Proven technologies exist for reducing all of sulfur dioxide, nitrous oxides, and fine particulate matter.  The tough one is yet to come: carbon dioxide.  Barring action by Congress, carbon dioxide regulation is coming, though: the Supreme Court has ruled that carbon dioxide is a pollutant under the definitions of the Clean Air Act, and that the EPA may not decline to regulate it.  The impacts of that will be much larger than those of the CSAPR.

8-14-12 -- This essay contains numerical errors due to an error in software I wrote for extracting summary information from an EIA spreadsheet.  I'm leaving the erroneous figures here in the interests of honesty -- I made a mistake.  A corrected version of this piece has been added.

Earlier this year I posted a piece that observed that in the US, nuclear power was largely an Eastern phenomenon.  I was curious about other differences in the sources for electrical power in the East and West portions of the US.  The EIA publishes numbers for electricity generation by state and "fuel".  Several caveats go with the following discussion:
The first thing that jumps out of the aggregate numbers is that the West generates only 8.9% of the total, while the East generates 91.1%.  The West's population, based on June 2007 figures from the Census Bureau, was almost 23% of the population total for the 48 contiguous states, so the share of generation is much less than I had expected.  I can think of a variety of possible reasons for the difference.  In no particular order: more moderate climate; less energy-intense economies (eg, less heavy manufacturing); and newer, more-efficient infrastructure such as housing.

The share provided by the five largest sources of generation for the West and East are shown in the following table.  As expected, there are fairly dramatic differences between the two regions.  The East depends much more on coal and nuclear (about 70% of their total) than the West does (about 40%).  If conventional hydro power is counted as renewable, then the West gets about one-quarter of its electricity from renewable sources.  Western wind, with a value of 0.0181, was close behind geothermal as a renewable source in 2007, and has almost certainly moved into the fifth spot by today.

The next table shows the top ten sources of electricity by region and source overall.  Depending on your biases, the table is making any of several different points.  I'll stick to the one that says the table shows the need for two distinct energy policies (at least with respect to electricity) in the US, one for the West and one for the East.  The problems of replacing the power from an aging fleet of nuclear reactors is an Eastern problem.  The problems of replacing large amounts of coal generation in order to address climate change issues is an Eastern problem.  When the time comes -- and I believe it will -- when the East requires a heavy dose of austerity, in terms of sizable per-capita reductions in electricity use, it will be difficult to justify imposing the same degree of pain on the West. 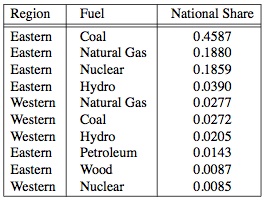