Last Saturday, Defense Distributed successfully test fired a plastic gun manufactured on a 3D printing machine.  The only non-plastic functional part in the weapon is a common nail used as the firing pin.  The files necessary to drive a 3D printer to produce the parts have been posted to the Web.  The gun is called the Liberator, named after the FP-45 Liberator single-shot weapon designed during WWII as an insurgency weapon to be air-dropped in large quantities behind enemy lines.  The announcement brought a considerable amount of criticism from certain parties, most notably Sen. Chuck Schumer (D-NY).  Criticism mostly falls into one of two categories: that anyone, including criminals, can download the files and print off a copy of the parts over the weekend, and that a plastic gun can be carried through airport metal detectors without setting them off. 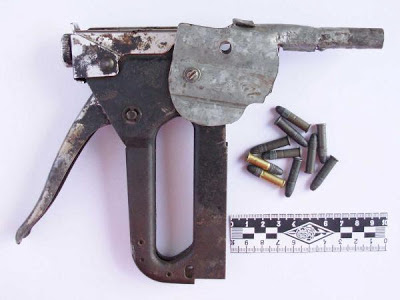 Home-built single-shot improvised handguns are nothing new in the United States.  The photo to the left shows such a gun, built around a construction stapler.  Zip guns were popular with urban gangs in the 1950s and 1960s despite their rather alarming tendency to blow up in the user's hand.  Zip guns fell out of favor because it became so easy to acquire real handguns.  According to the United States Congressional Research Service, in 2009 there were approximately 114 million civilian handguns in the US.  A conservative estimate is that 3 million new handguns are sold each year, so 125 million seems like a reasonable estimate of the number "in circulation" today.  Unsurprisingly, people who want a handgun really seem to have no trouble acquiring one.

Building a zip gun requires a small degree of mechanical ability.  It's also straightforward for someone with better but still modest machining skills and access to a metal lathe and a couple of attachments (available cheaply at Harbor Freight stores) to build real guns in their garage.  The Sten submachine gun was designed to be manufactured in exactly such settings — one Danish resistance group during WWII manufactured Stens in a bicycle repair shop.  Detailed drawings and specifications for the Stens are readily available, both online and through public libraries.  Even though production of fully automatic weapons is now illegal in the US without a hard-to-get license, some hobbyists still build Stens secretly, apparently for the joy of going far out into a rural area and firing a submachine gun at least once.

Non-metal guns that can pass through a metal detector have been a goal for various secret services and intelligence organizations for decades.  There have been rumors that ceramic and plastic guns have been developed, but none of those ever seem to be verified.  If you watch the video at the links above, the plastic Liberator is quite bulky — not something that you would expect someone to sneak through on their person in a long security line.  The bulk is inherent in the use of plastic — the plastic material is structurally weak, so the components have to be large in order to withstand the pressures generated when a cartridge is fired.  The device would also show up clearly in a luggage x-ray.  Even if the gun were successfully smuggled onto a plane, it's still a single-shot device.  A terrorist gets one shot before the passengers stomp them.

So, if it's easy to get a real gun for use in a non-secured setting, and still very difficult to smuggle a single-shot and not-very-useful plastic zip gun through airport security, what's to be afraid of?  Well, the scenario that concerns me is the bright ten-year-old who downloads the files and prints off a copy of the weapon on their parents' 3D printer, loads it with a high-powered round out of the box that Dad has neglected to lock up, and the weapon blows up in their hand.  Possibly they lose the hand; there's a substantial risk of losing an eye from flying parts; and while less likely, it's still possible that they die.  Or their friends who are watching are injured or die.  I'm willing to entertain a small wager that we see the injured child long before we see an adult making improper use of a printed zip gun.
Posted by Michael Cain at 2:19 PM No comments:
Newer Posts Older Posts Home
Subscribe to: Posts (Atom)