The broad theme of this series of posts is that a peaceful partition of the US into at least two parts is likely in the middle sort of future (probably more than 25 years, probably less then 50).  The particular partition that I think about is East and West.  Previously, I argued that there is a natural geographic dividing line between the two: the Great Plains region, already pretty empty of people and generally getting emptier.  This post puts up a whole pile of maps in order to argue that there are fundamental differences in the situations faced by the East and the West, which will in turn lead them to want to take different paths in solving some problems.  When those differences become more important than the similarities between the regions, separation becomes a viable option.  Some of these maps have appeared in earlier posts. 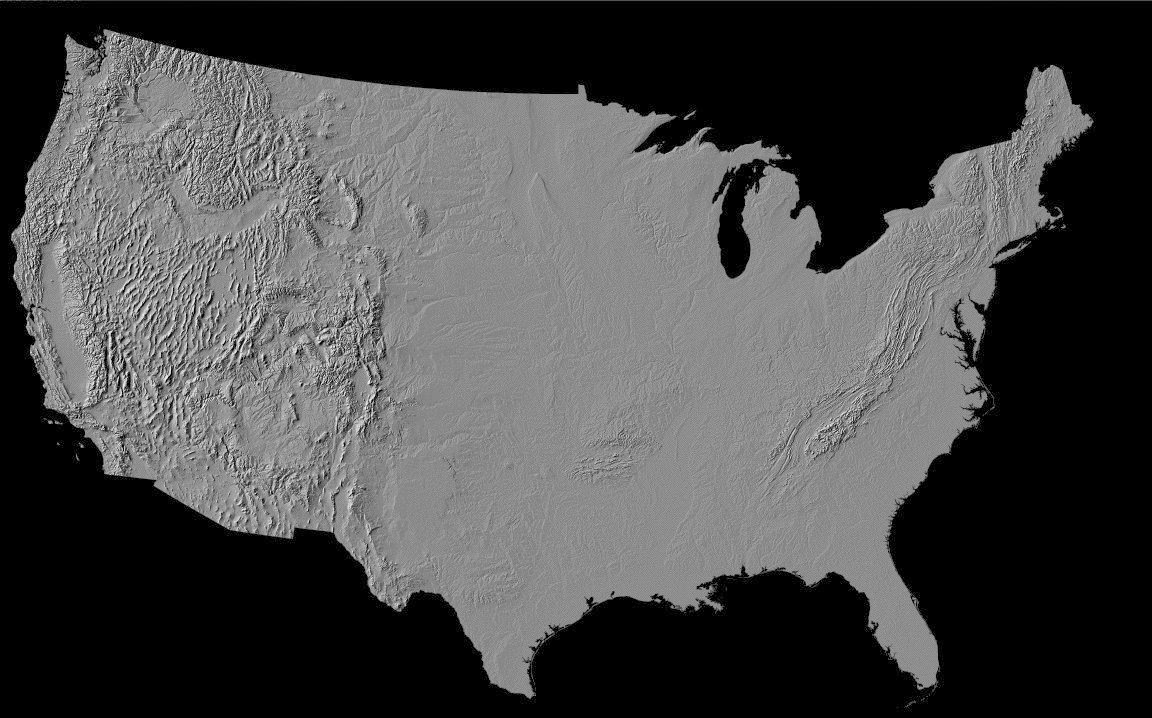 Mountains.  One-third of the 48 contiguous states isn't like the other two-thirds, as shown in the relief map to the left.  From the western edge of the Great Plains to the Pacific Ocean, the terrain is dominated by
mountains.  East of the Great Plains, not nearly so much.  The highest point east of the Great Plains is only 1,400 feet higher than my house in a Denver suburb; I routinely make up that difference on "easy" hikes up into the foothills.  The difference in terrain has a number of consequences, as discussed along with the next several maps.  Map credit: U.S. Geological Survey. (Aside: I love this map.  The USGS says it's based on 12 million elevation data points extracted from their topo maps.  A 56"x36" paper version is available for $12.00.) 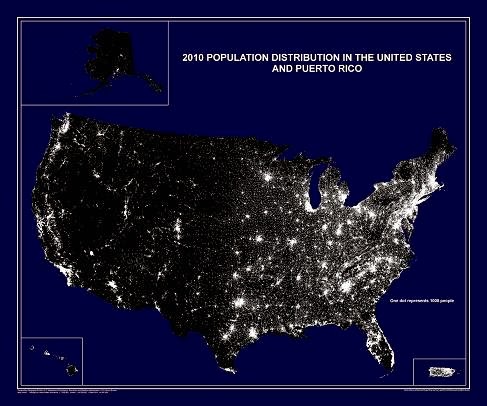 Settlement patterns.  The mountainous terrain dictated where people could settle (and continues to do so today).  Steep gradients mean that the rivers are generally not navigable over long distances (the Columbia being a limited exception).  Areas where agriculture is practical, and often the types of agriculture, are limited (the growing season at altitude can be remarkably short).  All of this dictates where significant numbers of people can live, summarized in the population map to the left (each white dot represents 7500 people).  In some ways, the western part of the US is more urban than the eastern part.  Not in the sense of tall buildings and small apartments, but rather that a larger majority of the people live in the urban and suburban areas of a few metro areas.  Metro areas are fewer, and much farther apart.  The spaces between metro areas are empty in a way that occurs rarely in the eastern part of the country.  Map credit: U.S. Census Bureau. 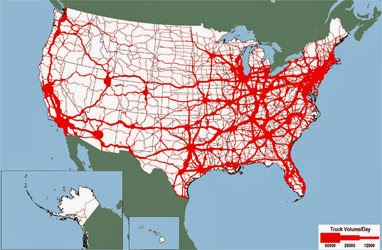 Transportation.  The map to the left shows truck freight volume by federal highway route for 2007, with thicker lines indicating more tonnage.  Just as the terrain had a large influence on where sizable cities are possible in the West, mountain ranges (and more importantly mountain passes) dictate where most of the transportation routes must run.  In some cases, the routes today are the same routes that wagon trains used when they headed out across the Great Plains headed for the West Coast.  Wyoming's South Pass is the only sane place for a busy freight route to cross the Rockies between Colorado and the Canadian border.  Implicit in this map is that a good deal of the east-west traffic involves transport between the coastal port cities and the more heavily populated East.  Rail freight volumes show a similar pattern, with the addition of a huge-volume route headed east from northwestern Wyoming.  That route carries very large shipments of Powder River Basin low-sulfur coal to eastern power plants.  Map credit: U.S. Department of Transportation. 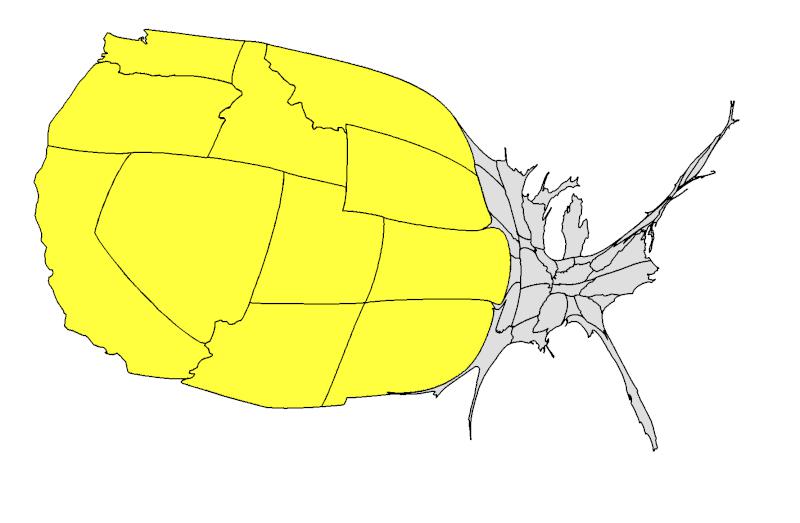 Federal land holdings.  As a result of the settlement patterns and timing (the federal government made an enormous change in public land policy around 1900), the federal government has very large land holdings in the western states.  The cartogram to the left, where states have been resized to represent the area owned by the feds, illustrates the point.  This has made life difficult for state governments in many ways.  Policies affecting a variety of things — some not immediately obvious — can be difficult to manage when the largest landowner in the state (about 40% of the land, on average) is free to simply ignore the state law and do what it pleases.  Local resentment towards federal ownership rises and falls in cycles, and seems to be on the upswing again in recent years.  Map credit: author's own work, using a wrapper around Mark Newman's highly useful cart and interp programs. 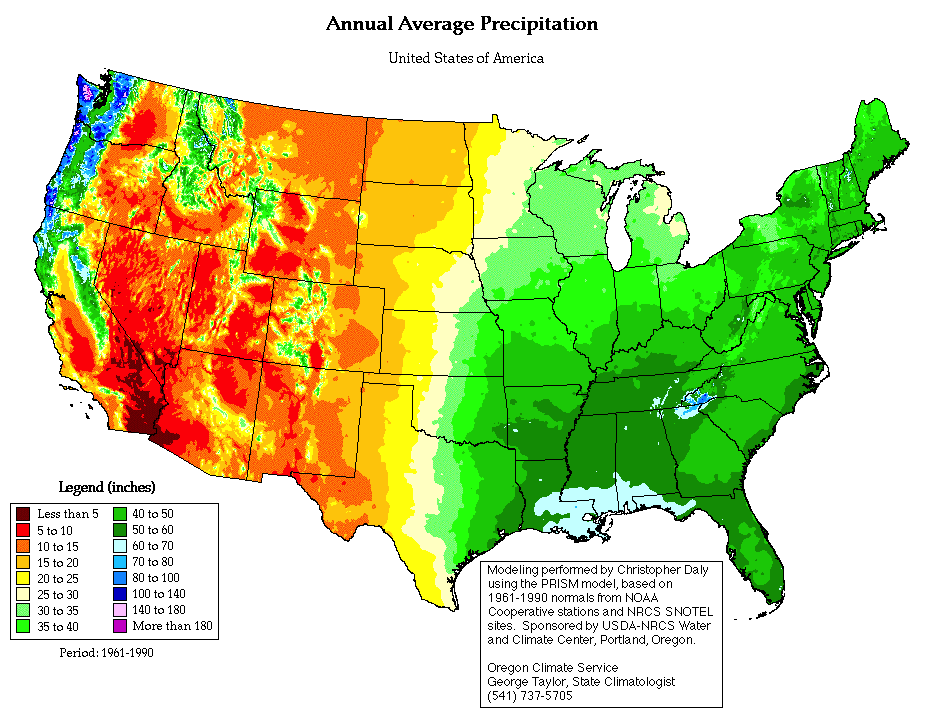 Water.  Precipitation west of the Great Plains is very low compared to the areas on the east side.  The areas with the heaviest precipitation are, for the most part, mountain ranges or valleys between ranges where the water falls as snow in the winter.  Agriculture in the West has always been about storage and management of water.  As Mark Twain is famously credited for saying, "Whiskey is for drinking; water is for fighting over."  Irrigation is important even in the Pacific Northwest, which appears to be much wetter, due to seasonal variations.  During the critical growing months of July and August, Seattle and Portland are as dry or drier than Phoenix and Denver.  Phoenix and Denver get summer rainfall from thunderstorms triggered by the North American Monsoon that does not reach Oregon or Washington.  The prime irrigation example is California's Central Valley: with irrigation it is perhaps the richest farming area in the world; without irrigation, it's a semi-arid near-desert.  Map credit: Oregon Climate Service. 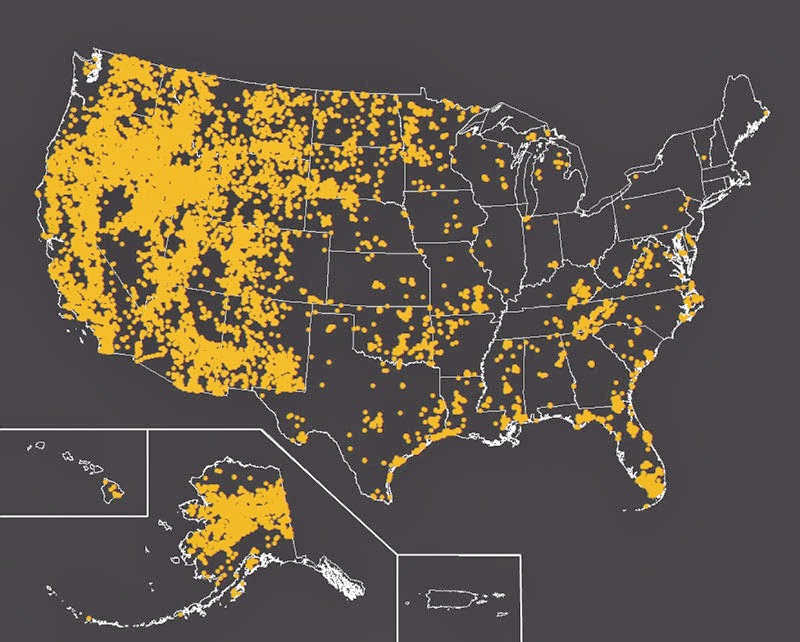 Fire.  The last three maps painted a picture of a West that is sparsely settled, dry, and with large areas held by the federal government, much in the form of undeveloped national forests and wilderness areas.  That's a nice prescription for wildfires.  Fire is, in fact, a natural part of many western ecosystems.  For example, some tree species have evolved so that the heat of a fire (which burns off brush and grass that would compete with the seedlings) is required to release their seeds.  The map to the left illustrates the number of wildfires from 1980 to 2003 that covered more than 250 acres individually.  250 acres is, by western standards, a small fire.  In most recent years, at least one western wildfire has reached at least 100,000 acres.  Some have been several times that large.  Western wildfires have become much more dangerous and damaging in recent years, though, in part due to misguided fire-suppression policies on federal land during the first half of the 20th century that allowed huge amounts of fuel to accumulate.  Map credit: U.S. National Aeronautics and Space Administration. 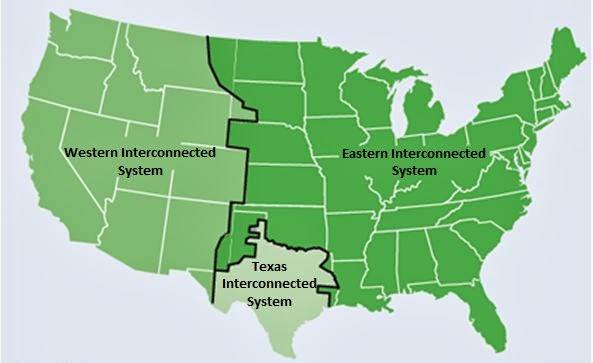 US electric power grids.  The next few posts in this series are going to talk about electricity.  I make no bones about it — I believe that managing the transition from fossil-fuel powered electricity generation to something else, in quantities sufficient to support modern tech, is the public policy problem for the next 50 years.  The US power grid is actually three grids that are largely independent, illustrated in the map to the left.  The dividing line between the Western Interconnect and the others falls largely within the Great Plains.  That division isn't surprising.  Historically, the three grids grew out of the connections between large utilities, and the Great Plains are a wide (and expensive) barrier for long-distance high-capacity power connections to cross.  In addition, much of the Plains region is served by rural electric cooperatives rather than larger utilities.  The important point to make here is that the two large interconnects are managed separately.  Map credit: Real Energy Services blog.

Solar and onshore wind renewable energy resources.  I also believe that there will be important differences in opinion on how to solve the supply problem, divided largely along the line between the Eastern and Western Interconnects (or down the middle of the Great Plains, or between mountain and non-mountain, wet-vs-dry, or any of several other factors that all yield much the same result).  Think of it in terms of the answers to the question, "Where will the non-fossil-fuel supply of electricity come from?"  Wind and solar (and conventional hydro) are renewable sources with large potential.  The map to the left shows where good on-shore wind and solar resources occur in the US.  Basically, from the Great Plains west.  Another important east-west difference is that many of the best resources in the West are relatively close to major population centers.  This map doesn't include conventional hydroelectricity; compared to demand, the large share of undeveloped hydro also falls in the Western Interconnect.  Map credit: Recycled Energy blog, using data from the National Renewable Energy Laboratory. 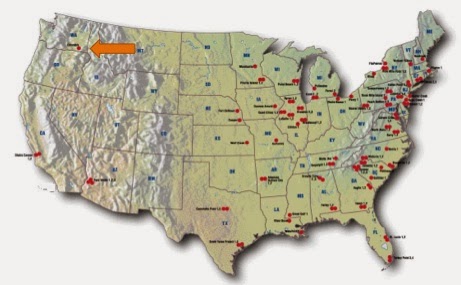 Nuclear power plants.  The other large existing source of non-fossil source that is commonly discussed is nuclear fission (commercial fusion has been 30 years away for the last 60 years, and according to the ITER time table, still is).  The map to the left shows the location of all commercial power reactors in the US.  Fission power is very much an eastern thing.  There were never a large number of reactors in the Western Interconnect, and the number has been steadily declining: the Ft. Saint Vrain generating station in Colorado, the Trojan station in Oregon, and most recently the pair of San Onefre reactors in California have been decommissioned.  The highlighted reactor is the Columbia Generating Station located on the Hanford Nuclear Reservation in Washington, which was the subject of a recent analysis whose conclusions were quite negative.  One might think that the geographic distribution would also make the problem of storing long-lived nuclear waste largely an eastern thing, but political power has — so far — dictated that waste burial will be consigned to the West.  The overall distribution of fission plants seems unlikely to change; all of the proposed new reactors that have reached the NRC license review stages are located in the Eastern or Texas Interconnects.  Map credit:  McCullough Research's Economic Analysis of the Columbia Generating Station.
Posted by Michael Cain at 10:56 AM