An Example of Future Grid Problems?

The New York Times ran a story this week about the possible consequences of shutting down the Indian Point nuclear power station.  Last month, Gov. Cuomo said he would insist that the two Indian Point reactors be shut down in 2013 and 2015, when their original 40-year licenses expire.  His decision to oppose license extensions may be reasonable; there have been a number of problems with aging reactors as they approach the end of their original license lifetimes, or after those licenses have been renewed.  The Vermont Yankee facility and New Jersey's Salem station have, for example, been plagued by tritium leakage as they age.

The Governor asserts that some combination of new generators and new transmission facilities can be in place by the summer of 2016, the first peak power season after both reactors would be shut down.  Various experts have weighed in, pointing out that the permitting, lawsuits, and construction for a new generator or transmission line invariably take more than five years in New York.  An example is the New York Regional Interconnect (NYRI), a proposed transmission line that would have brought power from upstate New York to the New York City and Long Island region served by the Indian Point plant.  After several years of planning, the NYRI was put on hold indefinitely in 2009 because of opposition by people in the areas through which it would have run.

Almost one-fifth of the entire US population lives in BosWash -- the strip from the Boston suburbs on the north to the Washington, DC suburbs on the south and within 100 miles or so of the Atlantic (see the map below).  In the future, that strip is very likely to resemble New York City's current situation.  About 25% of the electrical power is generated by aging nuclear plants.  As pressure to shut those down grows, planners will be left to the same "combination of new generators and new transmission facilities" to replace the nuclear power (and under current plans, meet steadily increasing demand). 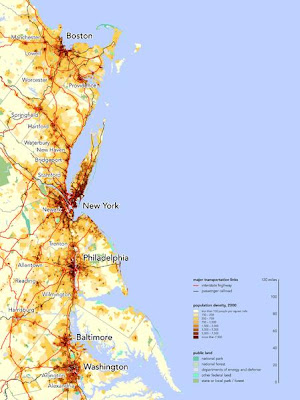 It seems unlikely that new coal plants will be built in that strip.  If for no other reason, burning coal produces large amounts of ash that must be gotten rid of.  Disposal of solid waste within the region is already a growing problem.  New York City, much of whose solid waste ends up in Pennsylvania, Ohio, and Virginia, is the most extreme example of that particular difficulty.  Gas-fired generation would require importing large volumes of natural gas.  Perhaps shale gas will allow the East Coast to produce sufficient amounts of gas for that purpose; I'll believe it when I see it.  The alternative sources of gas are far away, and will require either gasification facilities for liquefied natural gas, or large long pipelines.  The last option is to produce the electricity outside the region and import it over large new transmission facilities.

If the US must shift to renewable sources for its electricity, those transmission facilities will be large indeed.  Hydro power from Montreal, wind power from the Great Plains, solar power from the desert Southwest.  Huge facilities, carrying power long distances, running through areas where people seem likely to oppose the construction.  In short, the same basic problem that New York City and Long Island face today, only on a much larger scale.  The utilities that serve NYC and LI are warning that unless everything goes nearly perfectly, the city and the Island will be subjected to rolling summertime blackouts once the Indian Point reactors are shut down.  Over a somewhat longer time scale, it would appear that the BosWash corridor would be much the same: unless everything goes nearly perfectly, about 60 million people would be subjected to rolling blackouts.

Keep your eye on New York; it's likely to be a predictor for the future of much of the East Coast.
Posted by Michael Cain at 3:56 PM No comments:
Newer Posts Older Posts Home
Subscribe to: Posts (Atom)