From time to time, various bloggers comment on the fact that liberal blue states are generally net donors of federal tax dollars, and conservative red states are net recipients.  "Donor", in this case, means that the residents and businesses in the state pay more in federal taxes than the federal expenditures in that state.  The primary source for the information for these claims comes from the Tax Foundation [pdf], whose most recent version of the information is based on federal fiscal year 2004.  The report makes various adjustments, such as ignoring expenditures that can't be attributed to a particular state (interest on the national debt) and adding in deficit spending as part of the current tax burden (in proportion to the actual taxes collected).

People who spend too much time with me know that I have a peculiar fixation with the idea of separating the US into two parts.  There are lots of proposals kicking around the blogosphere about red/blue splits.  Mine is quite different, a simple east/west division based on several energy considerations and the ongoing depopulation of the Great Plains.  My definition of "West" is the 11 contiguous states from the Rocky Mountains to the Pacific coast; among other common features, these are the states with very large federal land holdings; and Alaska and Hawaii are such peculiar cases that I choose to ignore them.  One of the things that I hear regularly is that the West couldn't stand on its own, and one of the reasons is that those states are subsidized by the more heavily populated East.

The same Tax Foundation figures that get used for red/blue comparisons would seem to be a reasonable place to start.  The tax burden and expenditure figures from report #139 are reproduced in the following table.  The tax burden figures do not include the adjustments the Foundation made to account for the federal deficit; the details of that adjustment are not included in the report, and are probably not important to the conclusions I'm going to draw.  Let me begin with the last row of the table.  For the US as a whole, the per-capita federal tax burden is $6,369, and the per-capita federal expenditures are $7,311.  Taxes covered about 87% of the expenditures. 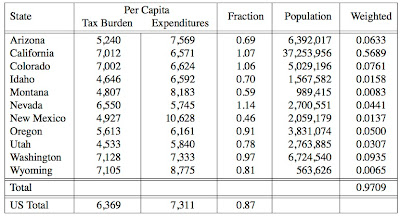 The main part of the table shows the same calculation for the 11 western states.  The portion of state-specific expenses covered by state-specific taxes ranges from 114% in Nevada to 46% in New Mexico.  Three states -- California, Colorado, and Nevada -- are net donors, the other are net recipients.  [Note that when the Tax Foundation does its adjustment for the federal deficit, Oregon and Washington also become donor states.]  The last two columns use the state populations (from Wikipedia, for July 2010) to convert the fractions of the expenditures covered to weighted figures, then sums those to get the fraction covered for the western states as a group: 97%.  In short, federal taxes in western states cover a significantly larger portion of the federal expenditures in those states than are covered when the country is considered as a whole.  The immediate corollaries are that the non-western states must be doing a worse job of covering their regional expenditures, and that if the "blue states subsidize red ones" argument is true, there is a corresponding "western states subsidize non-western states".

Granted, the skewed populations of the western states means that California is covering most of the western subsidies.  That doesn't bother me; any "Western States of America" would clearly be dominated by California, or perhaps by two Californias since a political reorganization would give the north and south portions of the state the opportunity to separate, an idea that Californians seem to bring up regularly.  More importantly, though, is that five of the eleven states do better than the national average, and those states illustrate a point that the red/blue state comparisons often miss: it's really an urban/rural thing.  California is tied with New Jersey as the "least rural" states in the country, using the Census Bureau definition.  All five of the western states that are better than average have economies that are dominated by their urban areas: Colorado's Front Range, Washington's Puget Sound, and so forth.  The West would appear to do better than the rest of the country because, despite popular perceptions, it is on average less rural than the non-West.

There is one glaring exception to the "urban equals wealth" argument among these western states: Arizona.  Arizona is in the top three western states by population, and is in the top ten nationally for non-rural: less rural than Illinois, Connecticut, New York, or Maryland.  But for some reason, the population and its concentration in the Sun Corridor from north of Phoenix to Tucson, hasn't resulted in the same degree of wealth that has occurred elsewhere in the West.  It would be useful to figure out what Arizona is doing wrong.
Posted by Michael Cain at 8:51 AM