John Eatwell properly describes pensions [1] as arrangements for transferring a portion of the goods and services produced by workers to non-workers (the elderly and disabled). There are different systems for financing pensions, – that is for implementing the transfer – but those are secondary compared to the size of the transfer [2]. Many people have written that current pensions in the US are not sustainable for demographic reasons: the number of non-workers is growing at a higher rate than the number of workers. I want to argue that while pension systems in the US – and the world – may not be sustainable, demographics is not the reason. Or at least, it is not the primary reason.

Output by workers grows with increases in population and in productivity. Consumption by non-workers grows only with increases in their population. A little algebra shows that if the growth rate for productivity is equal to the difference in the growth rates in population, then the system remains in balance, even the the ratio of workers to non-workers is declining. Assuming equality in those rates, everyone's standard of living (per-capita amount of goods and services) remains exactly the same, as the increases due to productivity exactly offset the higher growth rate of the non-workers. If productivity growth is higher, then everyone's standard of living can increase. This has certainly been the case with the US Social Security system. The ratio of workers to retirees has fallen from about eight in 1956 to a little over three in 2009, but everyone's standard of living has improved.

Social Security critics contend that having the worker to retiree ratio decrease from three to two will be disastrous, even though the fall from eight to three was not. Either they are ignoring increases in worker productivity, or they are implicitly stating that productivity can't keep pace with the change in populations. The former is an error in analysis, as productivity has been the key factor to date. The latter is a point of legitimate concern, as I will discuss in just a moment. Before doing that, though, a small digression...

All of the formal models that show a Social Security “crisis” in 2040 or 2050 – the one used by the SS trustees, the one used by the Congressional Budget Office, the one used by the Cato Institute – show that the crisis is not the result of benefit growth relative to GDP, but because of revenue shortfalls relative to GDP. The shortfalls occur because the GDP growth due to increases in productivity largely go to workers earning more than the cap on wages subject to the SS tax. In short, the models forecast that the old saw that “a rising tide lifts all boats” will not be true, and that the tide is going to rise over at the end of the marina with the big yachts, but not at the end with the little rowboats. Such a trend is likely, IMO, to result in significant societal problems well before 2040. But that's a topic for another day...

Lots of people have put together some version of the graph shown here. This particular one plots, for a number of countries, the log of per-capita income on the vertical axis and the log of per-capita energy consumption on the horizontal. The size of the circle represents the population of the country. The line is a least-squares best fit to the data points, not weighted by population. The correlation between productivity and energy consumption is clear. The direction of the causal arrow is unclear; do countries use more energy because they are richer (eg, jet skis for leisure), or are they richer because they use more energy (eg, backhoes instead of shovels)? 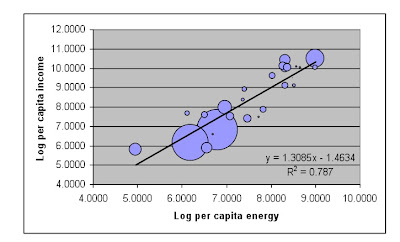 From its beginnings with Solow, economic growth theory has struggled to account for the growth that has actually occurred in the developed countries. Solow found that about 65% of the actual growth had to be attributed to factors other than labor and capital. Lots of different additions to the basic theory have been suggested, such as the concept of “human capital,” resulting in increasingly complex models. Ayres and Warr have taken a different approach [3], and assumed that the underlying problem was the model of production. A production function with a term for external energy sources fits the actual history in both the US and the UK quite well. Their work provides a theoretical basis for a causal link from energy use to productivity. Which brings us back to the subject of pensions. The sustainability of our pension systems requires that productivity increase sufficiently to offset the difference in the growth rates of worker and non-worker populations. Productivity increases require increased energy consumption (less increases in energy efficiency). Can energy use increase at the required pace, for say the next 30 years? The opinions on that question are all over the map. To select a few: James Kunstler says not just no, but hell no; Amory Lovins says probably yes, because efficiency can be improved so much; and the Energy Information Agency just says yes. I am inclined to say “Yes, in the long run,” but there's going to be an ugly transition period.
Posted by Michael Cain at 2:11 PM 1 comment:

Everyone ought to have a blog, I suppose. Someplace where they can write down random thoughts to be inflicted on the rest of the world. This is mine. The thoughts I will bother to write down will tend to be in the area of public policy, with an emphasis on energy policy. Not that that will stop me from writing about other things from time to time. My concerns with energy tend towards the macro rather than the micro, but again, that won't be a hard and fast rule. If I were to sum my concerns up in a sentence, it would probably be “I want my kids and grandkids to have lights; modest but comfortable living space; running water and sewers; adequate food; modern medicine; and computers.”

Using Peak Oil vernacular, I am not a cornucopian. At 6.7 billion people, the planet is almost certainly overcrowded, and possibly horribly so, particularly if you think about that many people living something that approximates the lifestyle I want for my own descendants. Business-as-usual is almost certainly not a workable option. The amounts of energy, and the sources of that energy, that my descendants use will be different than what I use. However, I admit to a certain – some might say considerable – degree of parochialism: the degree of overcrowding and the availability of energy resources varies from region to region, and I am more concerned about my own kids than about the kids of people living on the other side of the world.

On the other hand, I am not a Jay-Hanson dieoff.org doomer either. For one thing, overpopulation is not a uniform phenomenon. China and India together have an estimated 2.52 billion people in 4.97 million square miles; the United States and Canada have 0.34 billion people in 7.65 million square miles (507 people per square mile versus 44, more than an order of magnitude difference). Even within the United States, the distributions are not uniform. The portion of the contiguous 48 states west of the 100th meridian has the lion's share of the country's high-quality renewable energy resources (wind, solar, geothermal, undeveloped hydro) but only about one-third of the population.

Perhaps more importantly, the doomer view does not lend itself to the formulation of public policies that have any chance of being adopted. The message that we need to aim for Kunstler's World Made by Hand so that we don't crash even farther may be true, but it's not one that can be sold. It may not be possible to end up with a regional scaled-back energy-efficient version of modern technology (I won't say lifestyle), but I refuse to adopt that as a starting point for setting policy. To be fair, I will note that the cornucopian view has the opposite problem: if today's lifestyle and energy consumption can continue indefinitely, then there's little need to think about new policies at all.

Some caveats are probably in order. I like numbers. I like formal models. When the discussion involves engineering or economics, I like those to be done on a sound basis. When I make assumptions, I try to know when I am doing so and point them out. However, assumptions are just that and should be examined from time to time in the light of new knowledge. Let's see how it goes.