Should we allow professors to advocate innumeracy?

When I think about energy and energy policy, I almost immediately find myself immersed in numbers.  At a macro level, it seems to me that it's almost impossible to avoid that.  If nothing else, the numbers are so big that you have to do simple scale calculations just to be sure that you're not making some really stupid blunder.  For example, does the US grow enough corn to replace all of its gasoline usage with ethanol?  Tom Murphy's Do the Math is filled with that type of scale calculation, and Tom punches holes in a lot of the proposals for how we can meet future energy needs cleanly and affordably.

Last Saturday the New York Times ran an opinion piece titled "Is Algebra Necessary?" by Andrew Hacker, an emeritus professor of political science.  Dr. Hacker's basic position is that we keep too many people from succeeding in high school and college because of our silly infatuation (my adjective and noun, not his) with making people learn high school algebra.  To quote one of his statements, "But there’s no evidence that being able to prove (x² + y²)² = (x² - y²)² + (2xy)² leads to more credible political opinions or social analysis."  I claim that's not true, that there are a lot of non-credible political opinions held by  people who didn't do the math.  And even worse, if they can't do the math, they have no way to determine that their position is unsupportable.

A commonly heard statement about the US Social Security system is that over the next few decades, we will move from the current situation with about three workers per retiree to having only two workers per retiree, so it must follow that the system is insolvent.  If that's so, I tend to ask, then how did we move from having 16 workers per retiree in the early days of SS, to the current three workers per retiree, but the system continues to roll along?  And accumulated a $2.7 trillion dollar surplus in the Social Security trust fund?  Yes, we raised the tax rates to reflect more generous per-retiree benefits.  But if you can't explain how worker productivity increases allowed a 5:1 decrease in the ratio of workers to retirees over the past 80 years, then you're not competent to have an opinion on the subject [1].  And you can't make that explanation without understanding how exponential functions work.  And now you're back to algebra.


[1]  It's perfectly reasonable to develop a model and derive numbers and show that the productivity gains needed to allow the continued decrease in the worker-to-retiree ratio are unlikely to occur.  I wrote an argument that suggested that energy supplies are a key to that discussion here.

[2]  And I cheerfully acknowledge the wisdom in George Box's statement that all models are wrong but some are useful.  I'll also point out that a non-mathematical chain of reasoning can be just as wrong, and for many of the same reasons

[3]  I'd go at least a step farther than the minimum writing typically required in high school.  I want everyone to have to pass a real composition class; one where you write something almost every day and someone critiques it.  Such a class is, of course, a hell of a lot more work to teach than literature appreciation.  But probably more broadly useful than literature, too.  The composition class I took in high school as an option (well done, Ms. Morgan) was enormously more valuable, over the course of my life, than the literature classes I had to take in college that masqueraded under the name "English Composition."
Posted by Michael Cain at 9:50 PM No comments:

More on east vs west and fire

A few days ago I wrote a bit about my experience at a family wedding in SE Kansas and how one part of that illustrated the different attitudes people living east and west of the Great Plains have towards fire.  Today I came across an interesting map assembled by John Nelson of IDV solutions.  The map shows the occurrence of "large" fires in the US since 2001; bigger hotter fires are in yellow, smaller less energetic fires in purple, intermediate fires in red. 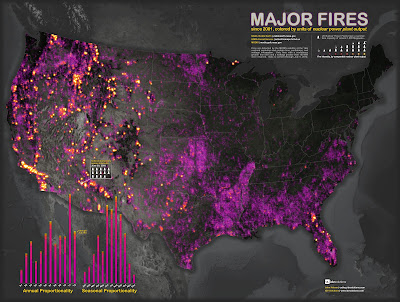 Much of the purple appears to be crop residues being burned in the field.  For example, this paper on the use MODIS satellite data identifies the area of SE Missouri and Arkansas bordering the Mississippi River as being largely cropland, planted in wheat and rice, and subject to annual stubble burning over wide areas.  Kansas, North Dakota, and eastern Washington all burn large areas of wheat stubble.

The bright dots, though, are almost certainly big wildfires.  And the overwhelming majority of them occur to the west of the Great Plains.
Posted by Michael Cain at 10:08 AM No comments:

Over the past month, I've driven two round trips across the Great Plains on family matters.  There were lots of wind turbine parts being moved from west to east on both I-80 in Nebraska and I-70 in Kansas.  Pulling out to pass the truck carrying a nearly 40-meter turbine blade gives one an appreciation for just how big those things are.

I was also within sight of five different wind farms.  The most impressive (visually) was the three parts of the Smoky Hills complex near Ellsworth, Kansas.  The wind farm is strung out along 24 miles of I-70, with some of the turbines within 300 yards or so of the highway.  Phase I consists of 56 1.8 MW Vestas turbines; phase II has 99 1.5 MW GE turbines; and the Post Rock project, still under construction, will have 134 1.5 MW GE turbines.  Phases I and II have a maximum output of 250 MW; the Post Rock portion will add another 200 MW.

While the sight of all those turbines near Ellsworth spinning in the 25-knot breeze that was blowing was impressive, I wondered how they stacked up in the "big picture".  As of the time I started writing this, April 2012 was the latest month for which the EIA had statistics available.  In that month, wind generation accounted for 4.3% of the total US generation.  That's a nice number compared to the situation even a few years ago, but it still leaves a long way to go.  It may also be at least slightly misleading -- spring and fall months are good for wind because of the weather, and the full summer air conditioning load hasn't kicked in.  Believe me when I say that SE Kansas was running its A/C pretty much flat out while I was there.

I'm always curious about state-level statistics.  The table to the left shows the percentage of power generated in each of several states in April.  I've selected states that contain large stretches of the Great Plains, or had large tall-grass prairie areas before the prairies were plowed under.  There's some overlap, of course -- eastern Nebraska, for example, was tall-grass prairie, while western Nebraska is Great Plains.  On this scale, a couple of smaller states approached one-third of their generated power coming from wind sources.  On a somewhat larger scale, these 13 states accounted for 27.6% of all US generation in April, but for 70.0% of all US wind generation.

At least to me, this suggests a region in the center of the US that has a good chance of deriving a big percentage of its electricity from wind.  How big a percentage depends on lots of things: dispatch rules that favor wind power when it is available, north-south transmission links to provide geographic diversity, etc.  Whether it can produce a significant share for the country as a whole is a much harder question to answer.

From time to time, I write a bit about differences in outlooks and/or attitudes by people who live on the eastern side of the Great Plains versus those who live on the western side.  For those who don't know, I live on the west side, in one of Denver's suburbs.  I spent the past few days in far southeastern Kansas on the east side of the Plains to attend a family wedding.  One of the big factors shaping attitudes on opposite sides of the Plains is amount of precipitation and the resulting consequences.  Denver averages 15.8 inches per year; the town where the wedding was held averages 42.1 inches per year [1]. 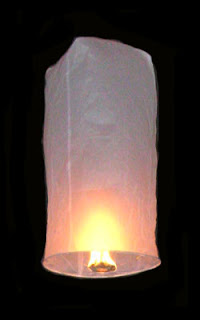 During the wedding reception, after it got dark, people sent up sky lanterns (representative illustration to the left).  These are a paper/fabric bag about four feet tall with a very simple framework at the bottom that holds a waxy block of fuel and keeps the bag open.  When the internal temperature of the bag is high enough, the whole thing is released and flies away like the small hot-air balloon that it is.  Fifteen or 20 in the air at once is an impressive sight (the world's record, set in Poland, is 15,000).  On the light breeze that was blowing in Kansas, the lanterns could travel a considerable distance.  Many became very small, very dim dots in the sky before they disappeared from view completely.  Some were clearly going to crash much sooner than that, quite possibly before the fuel burned out.

None of the SE Kansas locals seemed bothered by the release.  On the other hand, there was a small contingent of the bride's relatives who had lived in Colorado for many years, who were absolutely aghast.  To paraphrase what one of them asked the person in charge of the lanterns, "You're going to light something on fire and let it fly away?  With no idea where it will come down?  Are you insane?"  2012 has been a bad year for fires in Colorado.  At least in my mind, though, the lanterns would have drawn the same reaction from most Coloradans in July of any year.  And would have drawn the same reaction from the residents of large parts of the West.

With good reason.  When you consider the 11 states that lie west of the Great Plains (Arizona, California, Colorado, Idaho, Montana, Nevada, New Mexico, Oregon, Utah, Washington, and Wyoming), wildfires are a part of life.  Various kinds of fire: while Colorado's forest fires made national and world-wide news this year, an 84-square-mile grass fire that killed at least one person and destroyed multiple homes was relegated to local coverage alone.  And Colorado is at the bottom of the list of western states when fire size is considered: over the past century, the other ten states have all had fires much larger than Colorado's largest.

Wildfires and debates about wildfire policy are front-page stuff in the West, particularly during fire season.  How should liability be assigned, and how much liability?  In the case of fires started by human activities, it is not uncommon to read about the delivery of the fire-fighting bill -- often running to millions of dollars -- to the individuals responsible for starting the fire.  How much of the budget should be spent on fire fighting versus mitigating fire danger in state and national forests?  How much should private landowners be required to spend on mitigation?  Should people who build houses in wildfire-prone forests be required to pay fees to cover the costs of eventually defending those homes against fire?

There are places east of the Great Plains where wildfires occur.  But the East in general lacks the broad fire consciousness that pervades so much of the West.