A former colleague of mine visits the Consumer Electronics Show in Las Vegas every January, then writes up and distributes a report on what interesting (and silly) things vendors have on display.  This year's report has left me quite depressed.  Not because firms aren't creating interesting (and silly) things -- but because I've been in the market for a particular piece of consumer tech for the last 20 years, and it's beginning to look like I may die before it's available. (Note: this is sort of an annual complaint for me.) 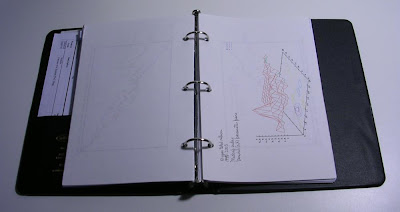 For more than 30 years, I've carried a little black notebook around.  It takes 8½ by 5½ inch paper with three holes punched appropriately.  All sorts of things are stored in the notebook: calendar, phone numbers, bits and pieces from ongoing projects (the 3D plot shown, for example).  The pockets in the front and back cover are stuffed with the various pieces of paper that one picks up over the course of the day/week/month.  Most importantly, though, I take occasionally copious notes in my cramped little handwriting.  I'm a mathematician originally and have done lots of technical things over the decades, so "notes" often includes math, graphs, and lines-and-boxes drawings, as well as plain text.  I want a computer replacement for my little black notebook.  TPTB have been telling me that what I want should be available Real Soon Now for a very long time.

Ideally, I want something in about the same form factor.  I don't mind that I can't stick it in my pocket; I can't stick the notebook in my pocket either.  When it opens up, I'd like two screens.  The left one can be an e-ink sort of display like those used in e-book readers; the right one needs to be the same physical size, but more along the lines of a tablet's LCD screen, but capable of high-resolution input with a stylus.  One of the applications would be to have a book open in the left screen, and a piece of paper corresponding to each page in the book that I can jot notes on in the right screen.  Plus all the other things that my notebook does for me.


I had great hopes for what Microsoft's Courier product might have become.  It folded, had two screens, at least one of which appeared to allow high-resolution stylus input, all in about the right-sized form factor.  Unfortunately, Microsoft closed the project down before the product was released [1].  The Galaxy Note 10.1 that my colleague saw at the show has potential, but the screen's still too small (an 8½ by 11 inch piece of paper has a diagonal measure of just under 14 inches) and pictures of what people have written on it all look like they're using a grease pencil, not my preferred medium-point Parker ballpoint.  The YotaPhone  is a somewhat outsized smart phone with a conventional color LCD display on one side and a monochrome e-ink display on the other.  The Boogie Board Sync allows uploading a sizable page of drawings and text from a stylus at better resolution than most touch devices, but doesn't support data flow in the other direction.  Plastic Logic has some really neat display and sensor technology, but hasn't combined them yet -- and no one seems to be building products around that technology.

Sigh... I suppose I'm just a fossil.  If only I'd get with the program -- I'm supposed to consume content, not create it.  Or at least confine my creation to exciting new things, like speech and image and video.  Not something as old-fashioned as drawing/writing fine lines on paper.


[1] Various reports suggest that the project was killed because it didn't fit the Windows/Office model that drives Microsoft profits.
Posted by Michael Cain at 3:47 PM