Even though we're only midway through 2013, Colorado Republican politicians, past and present, are declaring for the races for their party's nominations for the 2014 election's big statewide offices of Governer and US Senator.  One of the remarks State Sen. Randy Baumgardner's made when he was tossing his hat in the ring for the US Senate seat -- and an impressive hat it is, oft noted upon down at the Statehouse -- struck me: "It's time you have somebody representing middle America, rural Colorado and working Colorado.... I am middle America. I ranch for a living. I'm connected to the land."  The thought struck me after I read this, how well do I represent Colorado voters relative to the so-far declared Republican candidates?

The three who have announced are former Rep. Tom Tancredo, State Sen. Greg Brophy, and State Sen. Randy Baumgardner.  Let me provide a quick demographic sketch for each.
I was born in 1953; spent my childhood in a small town in Iowa, but my adult life in urban/suburban settings; I moved to Colorado 25 years ago; I have worked for large corporations, as an individual proprietor, and for the state government as a non-partisan legislative policy analyst for three years; sent two kids through Colorado's public K-12 system and assorted state universities or colleges (and taught a semester of calculus at the local community college);  I live in one of the Front Range counties (the 10 most populous counties, located along the I-25 urban corridor from Pueblo on the south to Fort Collins on the north, account for 80.8% of Colorado's population as of the 2010 census); politically I'm a pragmatist first and a strong believer that government ought to be simpler, which is not the same as smaller.

Not to put too fine a point on it, but I think there's a pretty simple case to be made that I'm much more representative of Colorado's voters, particularly the voters the Republicans need to win to reverse their recent problems with state-wide elections, than those three.  And that's a real problem for the Republicans.  Population growth, job growth (in absolute terms), wealth accumulation -- those are things that are being dominated by the Front Range.  The Republicans need to run candidates that can make a convincing argument that they understand and have a platform intended to deal with the problems of the Front Range.  A simple example is transportation.  A decade ago, it became apparent that adding lots more lane-miles wasn't an effective solution to all of the transportation needs of the rapidly growing population of the Front Range core around Denver.  As a result, voters in that core approved the FasTracks light rail system [1].  TTBOMK, the Republicans have never come to grips with the idea that people would chose something other than cars and roads.

A candidate for Governor or US Senate who runs on "I represent rural Colorado values," with an implied "I represent rural Colorado interests," is a losing proposition.  Colorado's population demographics have reached a tipping point, and the Republicans need to recognize it.  Until they do, they will continue to lose the big state-wide elections, and by an increasing margin.


[1] I'm a FasTracks fan.  I am so looking forward to the day when the Gold Line opens in Arvada in 2016, with a station within two miles of where I live, and trains that will reach downtown in 18 minutes in sun, rain, or snow.  The snow part in particular, since the Denver area roads are so crowded that a good snowstorm turns them into parking lots.
Posted by Michael Cain at 4:50 PM No comments:

Regular readers here (if there are such persons) will have noticed that, from time to time, I write about differences in East and West in the United States, particularly with respect to energy.  There is a larger purpose in that: I have convinced myself that the long-term trends in energy, population, and other items suggest an eventual split of the US into independent eastern and western parts.  A peaceful separation, most likely, with the two pieces simple "growing apart" over time and eventually reaching the conclusion that each would be better off if they didn't have to worry about the needs of the other.  It certainly won't be a near-term event.  I anticipate that it will be 25 years before the effects of various trends begin to create a serious division, but that within 50 years the idea will be mature enough to act on. 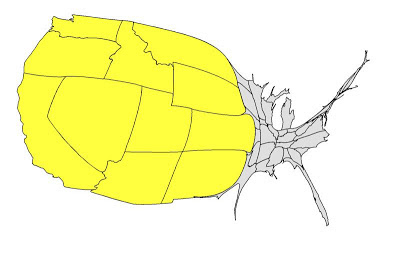 This is the introduction to a series of posts outlining my argument.  I wrote a roughly 3,000 word treatment of the subject that appeared here.  This series of posts will total substantially more words than that, but will still be an incomplete argument.  I'm in the process of (slowly) writing a book to make a more complete case.  The 11-state West that I envision consists of the states highlighted in yellow in the cartogram to the left.  The reason that this is an interesting cartogram will be the subject of one of the posts (For those unable to wait, the area of each of the states indicates the size of the federal land holdings in each state.  The federal government owns a very considerable part of the West, with a long history of being an inconsiderate and misguided neighbor.)

The series will tie together a number of threads.  Declining availability of liquid fuels and the results of that.  Security of the electricity supply (in terms of having enough available) to support a modern high-tech society.  Population changes and empty spaces.  Ways that the East and West are different.   Why those differences mean the West and the East will have to (and be able to) pursue different approaches to the consequences of the energy problems.  Ultimately leading to a situation where both East and West think, "We would be better off if we could focus on our problems, without having to consider their problems."  And eventually, a discussion of some of the standard hurdles that are proposed for why a split of the country wouldn't be possible.
Posted by Michael Cain at 11:04 AM 1 comment:
Newer Posts Older Posts Home
Subscribe to: Posts (Atom)