In 2013 there were a number of proposals put forward to create new states by splitting existing ones.  The most widely covered ones have been Colorado's 51st State movement, the State of Jefferson movement in far northern California and southern Oregon, and the movement in western Maryland.  One thing that all of these have in common is that they represent more rural portions of the states in question seeking to "escape" from the urban parts of the states.  Certainly in the cases of California and Colorado, the escape would come with a hefty price tag -- the rural areas that want to leave are subsidized financially by the urban areas.

This year there have been two new state-splitting proposals with the opposite perspective: urban areas seeking to be free from the rural areas.  The first of those was the ballot initiative in California that would seek to split the state into six parts.  Funding for signature collection came from a Silicon Valley venture capitalist who reportedly believes tax rates in his new state would would be substantially lower because they wouldn't have to subsidize the Central Valley and rural northern California.  Too few signatures were collected for the initiative to make this November's ballot.  The second is a proposal to split off southern Florida, so the urban areas there could begin taking steps to deal with climate change consequences like rising sea levels. 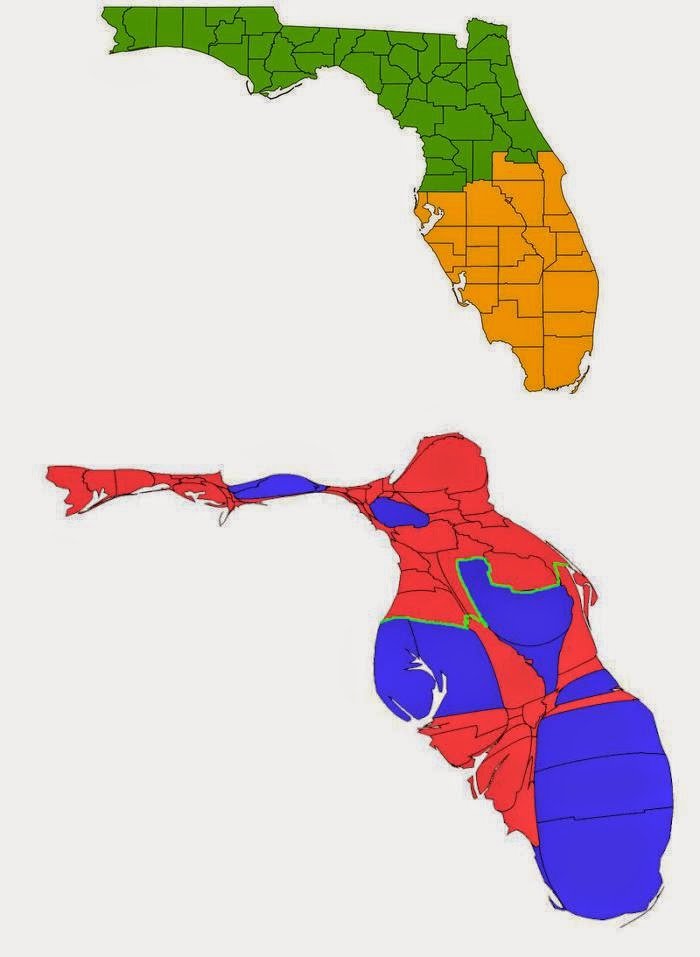 The proposed split of Florida is shown in the upper portion of the figure to the left.  Things are in an early stage.  South Miami's city commission passed a resolution calling for the separation and will now send the proposal to the 24 counties that would be South Florida.  As is true for so many of this type of proposal, this one probably won't go anywhere.  The hurdles for actually splitting a state are pretty darned high.  Among other things, Congress would have to bless it, and the balance of power between political parties, particularly in the Senate, becomes a major consideration.

Why do I say this is a movement by an urban part of the state to flee the rural part?  The lower part of the figure is a cartogram with counties resized to represent population.  The green line shows the proposed division between north and south.  The red/blue coloring is the standard one for election cartograms and shows whether the county voted majority-Obama (blue) or majority-Romney (red) in 2012.  The three biggest urban areas in the state -- Miami, Tampa, Orlando -- would be in South Florida.
Posted by Michael Cain at 1:19 PM No comments:
Newer Posts Older Posts Home
Subscribe to: Posts (Atom)