What Would Your "Manhattan Project" Be?

Suppose that you were responsible for choosing the target for a new "Manhattan Project" for the United States.  For those who don't remember, the Manhattan Project was the top-secret effort to build the first atomic bomb.  The effort cost, in 2012 dollars, about $25 billion.  Actual development and production of the weapons was surprisingly cheap; 90% of the money was spent to build and operate the factories that produced the necessary fissionable materials (highly-enriched uranium and plutonium).  Another way of measuring the size of the budget is that the total amounted to about 16 months worth of NASA's current budget.

In setting some parameters for the project, it is useful to ask why the Manhattan Project was successful.  My personal opinions on that matter are that the project avoided all of the principle reasons that tech projects often fail.  It wasn't vague: the goal was to produce a working atomic weapon small enough to be delivered by the bombers of the day.  There was a reasonable chance of success: soon after the project was organized, the until-then-hypothetical sustained nuclear chain reaction was demonstrated.  It had a challenging schedule: it was believed at the time that Germany had a well-developed nuclear weapons program, and that failure to be the first to have a working weapon could mean losing WWII.  And finally, it was publicly funded so the participants were focused on solving the problems: no one was distracted by thoughts of how the project would make them rich.

Let me take those as the parameters, then.  $25 billion total budget; specific "product" to be delivered (quantity one, or at most a handful);  and broadly useful in the sense that it's produced new knowledge about how to build something.  I'm mostly an energy guy these days, and a macro- and supply-side energy guy at that.  And I'm concerned with the electricity part of the problem.  I believe that it is straightforward (which is not to say easy or painless) to cope with the liquid-fuels issue, but I am much more concerned about keeping the lights on reliably.  I have three possibilities on my short list.  To cut off arguments, I'll point out that using the money to build out transmission capacity, or to put up 10,000 wind turbines, doesn't satisfy the criteria.

First possibility -- a 500 MW or larger generating station based on solid carbon fuel cells, operating at high efficiencies and reproducible at reasonable cost.  There are a number of possible fuel cell technologies that are at least laboratory toys, eg molten-tin-anode cells.  The US has massive coal reserves.  It seems probable that much of those reserves will eventually be oxidized.  Fuel cells operating at high efficiencies, relatively low temperatures, and producing a nearly-pure CO2 stream that could more easily be sequestered seems like a better alternative than what we currently have.  Ideally, such fuel cells should also be able to accept suitably dry biomass, high-carbon waste, or other sources of carbon.

Second possibility -- a modular factory-built high-burnup fission reactor.  Ship it to the site, hook it up the the steam (or gas) turbine system, let it generate electricity for 15 or so years and then ship it back to the factory for refueling, refurbishing, or whatever.  I know that fission is controversial, but it is my belief that at some point, the eastern US will once again embrace it.  A large majority of the US population lives in the states of the Eastern Interconnect, an area that is relatively low in renewable options.  As their existing generating capacity (almost 70% of which is coal and nuclear) ages and is retired, a significant fraction of it will have to be replaced.  It seems almost a sure thing to me that fission will continue to have a sizable piece of the pie.

Third and final possibility on my list -- high-capacity batteries for traction (and some fixed) applications that use non-exotic materials (given global supplies, lithium is becoming an exotic material).  The battery doesn't have to be perfect.  For example, I don't care if it can't be fully recharged in minutes.  People will learn to live with such limits.  Much of the money may be spent figuring out how to manufacture necessary materials.  There are several intriguing possibilities for battery/capacitor/combination tech using graphene and other carbon structures.  The problems with those are figuring out to produce the right nanostructures in volume and at a reasonable price.
Posted by Michael Cain at 12:27 PM No comments:

Why can't computers "be" a paper and pen?

Caution: Wearing one of my old hard-core techie hats today...

Previously, I wrote about the possibilities of using real-time multimedia communications over the Internet as a substitute for oil-based liquid fuels, with "substitute" used in the sense economists do.  That is, Internet communications can be a replacement for some types of current face-to-face communications enabled by cheap oil.  As part of that, I mentioned prototype software for such communication that I wrote almost 20 years ago.  This post is really just whining, but here it is anyway: why isn't real-time multimedia communications between people using the Internet easier?  In particular, why isn't it trivial for me to connect with a colleague and share high-quality paper-and-pen imagery?  Why can't I hold office hours for my calculus class here at home, with digital paper that's good enough to write derivatives and integrals as easily (and relatively densely) as I do on a white board?  Why can't the class be held online one or two days per week, with coordinated audio so that students can hear each other ask questions when called on, mark things up as necessary, hold side conversations without interrupting the other students, record what happens for later review?

There are some network reasons why things aren't as far along as I would like, based on how access to the Internet works in the US:
That's not to say there aren't IP-based conferencing services.  One reason for my disappointment in the services that are offered -- and the large majority do seem to be for-pay services -- is my long-standing infatuation with paper and pen.  I want the "shared" part of the communication to do the things that are done with paper or paper substitutes that fit a particular situation.  For example, teachers and students meeting during office hours write on and point to a piece of paper that sits between them.  In a classroom, overhead slides and the whiteboard are larger versions of that, with more restricted access as to who can write when.  My version of collaboration starts with something one person has written or drawn, and everyone can debate and discuss and scribble all over it, like Arlo Guthrie's description in Alice's Restaurant, "...with circles and arrows and a paragraph on the back of each one..."  I'm simply not interested in sharing an animated PowerPoint presentation or many of the other "push" products and services that are out there.

Lastly, I want to bitch about the absence of any affordable IO device that can do a good approximation of paper and pen.  I suppose the problem is that I'm a mathematician at heart, and always will be.  And there's nothing as good as paper and pen for rapidly and clearly writing equations, sketching graphs, adding lines and boxes and annotations as needed.  Simple touch tablets like those made by Wacom and others separate the point of the pen from where the marks appear -- you can write with them, but not quickly and not in my tidy but cramped style.  Monitors that incorporate high-resolution touch tablet technology cost more than many computers.

All the things that computers do well... but none of them are an affordable substitute for a simple pad of paper and a pen.  Bummer.

In discussions about Peak Oil, one of the criticisms often leveled at economists is their assertion that substitutes for oil will be available.  Some of the economists may mean that in a strict liquid-fuels sense, and most of the Peak Oil crowd interpret it in a strict liquid-fuels sense, but it's important to think about the statement in a more nuanced fashion.  That is, that there will be substitutes for goods and services that are currently oil-powered, but in an indirect fashion.

Almost 20 years ago now, I wrote various prototype applications that supported multimedia sharing over the Internet transport protocols (TCP/IP).  The emphasis was on the kinds of media that got used regularly in technical meetings and classes: audio, an overhead transparency projector, a whiteboard, page-by-page looks at documents, all with various mark-up and pointer capabilities.  There was even some of the world's worst live streaming video.  OTOH, in that sort of situation, the primary purpose of video turned out to be the ability to do out-of-band body-language signaling (I'm bored, I'm excited, I have something to say), and video can be remarkably bad and still convey those messages well.  The software used IP multicast where possible to reduce bandwidth needs.  There were a variety of control modes, since the needs of a small group of equals are different from the needs of a distributed classroom. 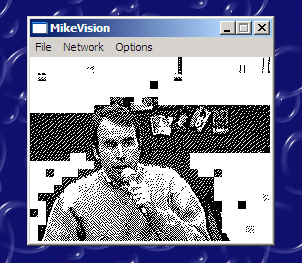 The main point is that substitutes are not always obvious and direct.  A lot of oil is burned to enable some form of communication.  There are alternate forms of communication that don't need to use oil, or at least not nearly so much and not so directly.  And I'll be the first to say that multiple media over IP is not a substitute for all forms of personal communication; there are situations where face-to-face is much better.  There will be other situations where liquid fuels are being used to provide a service that can be implemented in some other fashion.  So "substitutes" for petroleum-based liquid fuels doesn't necessarily imply drop-in liquid fuel replacements.  That's an important point to keep in mind when considering how things might unfold in the future.

Technical notes on the video shown above:
240x184 pixels, one-bit color depth (real black-and-white), 15 frames per second.  At the time, many of the computers, even in an R&D setting, had one-bit monochrome displays and quite limited processing power.  This particular coding/compression scheme had the advantages that it could be displayed directly on such screens while putting very little load on the processor.  An individual image looks worse than the moving video; the human vision system does a lot of smoothing when there's motion going on.  Only "moving" parts of the image were immediately updated; the background filled in gradually.  It was somewhat surprising how much information was conveyed: body language, facial expressions, etc.  It was easy to tell if the audio was properly synchronized (it was, a claim that several very expensive conferencing systems that came through the building for evaluation a couple of years later couldn't make).