This past week, Gordon Gee of Ohio State said publicly that Boise State and Texas Christian have no business playing in the BCS title game.  Gee's complaint is that neither Boise nor TCU play the kind of "murder's row" schedule that the Big 10 and SEC member schools play.  This would seem to be a rather peculiar argument to make at this point in the season, when Ohio State's strength of schedule (SOS) is, according to the Sagarin rankings, somewhere between Boise's and TCU's.  It seems even more peculiar in a year when the Big East, one of the conferences whose champion gets an automatic BCS bid, has only one team in the top 25, West Virginia currently at #24.

The BCS system was set up by the big conferences (and Notre Dame) in order to ensure that they got teams into the big-money bowls.  And it worked well for a considerable time, since teams outside of the anointed groups seldom made it into the upper reaches of the rankings on a consistent basis.  The system could handle the infrequent interloper, buying them off with a big payday as an at-large team.  The possibility that an outside team would achieve sustained success seemed remote.  The "strength of schedule" argument is the last line of defense in that case.  The outside teams only seem to be doing consistently well, the argument says, since they don't have to play a difficult conference schedule during the stretch run of the season.

Oddly enough, the situation has become a matter of proposed public policy.  Each year of late there are numerous outcries for Congress to force the NCAA and the BCS schools to do something different.  The most common suggestion is a playoff system similar to that used by the other NCAA divisions.  Such proposals would appear to ignore the important role that the bowl system, with the big games scheduled in a short period of time between semesters or quarters, play in the overall big-time college football picture.  The bowls provide the conferences with additional money (and revenue sharing means that even the poorer schools in the big conferences get a cut).  The bowls are a major recruiting opportunity.  The long lead time for the major bowls give fans time to plan a vacation trip around their team's game.

The problem is, in my mind, not so much that the BCS arrangement with the conferences is a largely closed arrangement, it is that the conferences themselves are closed.  This past summer demonstrated that changing conference membership is quite possible: Nebraska went to the Big 10, Colorado and Utah went to the Pac 10, Boise State went to Mountain West.  The last two make an interesting contrast.  Utah will no longer have to listen to complaints that they didn't play in one of the "tough" conferences.  Boise still will, even though it's pretty easy to make the case that the Mountain West will be superior to the Big East as far as the caliber of its football.

The obvious answer is to make the conferences "open" in the same way that the English Premier soccer league is.  Each year, drop the team with the worst record from the conference (at least for football purposes).  Replace the dropped teams with the highest ranked teams from outside the BCS conferences.  With such an arrangement in place, Gordon Gee's argument would be moot: Boise and TCU would have been added to the big conferences in place of teams like Indiana and Vanderbilt some years ago.  Complaints that such changes would break up tradition are silly.  Teams play four non-conference games each year, and the traditional rivalries could easily be scheduled in those slots.

The post-season part of the BCS system isn't broken.  It serves both the schools and the fans well.  The real problem is that the conference system is broken.  Open the conferences up and let the rising new teams have an opportunity to compete on the "equal" playing field.
Posted by Michael Cain at 10:03 AM No comments:

As reported by CNN, the Chevy Volt faces one last government hurdle before it goes on sale to the public.  New cars must have an EPA mileage sticker in order to be sold in the US.  The EPA hasn't figured out how to measure the mileage of a plug-in electric hybrid.  No measurement standard, no sticker, no sales.  This isn't a new issue; GM has been in discussions with the EPA since before September 2008, and the issue remains unresolved.  If you haven't looked recently, the current EPA window sticker for a gas-powered vehicle looks like this: 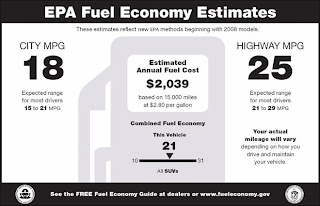 The case of an all-electric car has also been settled.  The relevant portion of the Tesla Roadster is shown below.  A picture of a stylized battery instead of a stylized gas pump, and the kiloWatt-hours for 100 miles in city and highway conditions instead of the MPG figures.  Of course, there's always the caveat that "actual consumption and range may vary."  Nissan has agreed that the range on a full charge for its new Leaf will vary wildly depending on the conditions: from as high as 138 miles, cruising at 38 MPH and an outside temperature of 68 degrees, to as low as 47 miles in stop-and-go traffic averaging 6 MPH, an outside temperature of 86 degrees, and the air conditioning running. 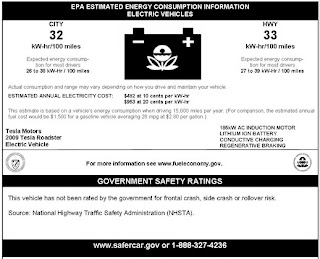 A plug-in hybrid can be rated in several different ways.  You can measure the gasoline mileage when the vehicle is running on gas, as would be the case for most of an extended highway trip.  The Volt will probably be somewhere in the upper 30s as a straight gasoline vehicle.  You can measure the efficiency as an electric vehicle, in kWh per 100 miles.  The Volt will probably be in the same 30-33 range that the Tesla Roadster and the BMW Mini E get, given similar weights, battery packs, and electric motor efficiency.  But what about the cases where you use both modes?

I hold out little hope that the EPA will be able to boil things down to a single tidy window sticker that is useful to consumers.  They can provide the basic information: likely battery-pack range, kWh per 100 miles, and gasoline mileage.  But it's going to be up to the individual consumer to know their driving habits in order to determine how much of the time they can operate in electric mode and how much in gasoline.  If Chevy sales staff are going to be helpful, they're going to need some training so that they can sit down with potential customers and help them work through the details.

To use myself as an example:  I currently drive about 7,000 miles per year.  1,000 of that is a single round-trip to my mother's each summer, another 1,000 is probably on days with between 40 and 120 miles driven, and 5,000 is on days less than 40.  On the other hand, Colorado has recently adopted new electric tariffs so that the incremental electricity used to charge a plug-in vehicle would likely be billed at a higher rate in the summer but not in the winter.  Do I drive more in the summer or winter?  To be honest, excluding the trip to my mother's (which would be almost all gasoline anyway), I have no idea.  And I'd be willing to bet most other people don't either.

In the long run, electric cars make sense because that's how you can burn coal, nuclear, hydro, wind, or solar power in your personal transportation system.
Posted by Michael Cain at 9:27 AM No comments:

There are a number of things worth noting from this forecast.  First, they show that currently producing crude oil fields, taken together, are in terminal decline.  There's an implication there that enhanced recovery techniques are not going to save us.  Second, total crude production stays almost perfectly level for the next 25 years; by 2035, production from fields we already know about, but are not currently producing, will still be increasing; and fields yet to be found will be producing over 30% of the total conventional crude.  I'll say something about how unlikely I find that in a few days.  The fact that new production almost exactly offsets the decline in current fields seems suspicious.  Finally, total liquids production increases to over 95 million bbl/day, with the increase all coming from natural gas liquids and unconventional sources.

The second graph is the one for the forecast of coal use for generating electricity:

China is forecast to increase their electricity production from coal by almost 50%, driving a global increase of 25% over 2010 levels.  You have to think about where the increased production is going to come from.  Generation will probably become more efficient, assuming that new plants use supercritical and ultracritical steam cycles, but a substantial increase in coal production will still be necessary.  It seems to me that such an increase is at least problematic.
If you are a believer in climate change caused by increasing levels of CO2 in the atmosphere, these two graphs together are extremely discouraging.  Unless you believe that China is going to capture and store the emissions from its coal-fired power plants, the graphs tell a story of steadily increasing emission levels, not the rapidly declining levels that would be necessary to stabilize the CO2 levels already present.
Posted by Michael Cain at 11:40 AM No comments:
Newer Posts Older Posts Home
Subscribe to: Posts (Atom)