Supreme Court Arguments on the ACA

I am informed that attempting to determine what the justices of the US Supreme Court are thinking by the questions that they ask during oral arguments is largely a waste of time.  Nevertheless, I have succumbed to the temptation in the case of the Affordable Care Act.  And after only two of the three days of testimony, no less!  Most discussion of the ACA's constitutionality seems to divide into two parts; after reading the transcripts to this point, I think there are actually three groups on the Court.  Disclaimer: statements about what various justices are thinking is speculative on my part; no disrespect is intended.

Call the first group the conservatives -- Scalia, Alito, and Thomas, even though Thomas doesn't actually ask any questions during oral arguments.  This group is inclined to say the Commerce Clause doesn't stretch nearly far enough for the purposes to which Congress is putting it in the ACA, so the Act fails.  Call the second group the liberals -- Ginsberg, Breyer, Kagan, and Sotomayor.  This group is inclined to say that the outcome of the ACA is constitutional, so the mechanisms Congress selected for implementation don't matter.  The third group, consisting of Roberts and Kennedy, seems the most interesting to me.

One of the points the liberal group hammered home repeatedly is that a single-payer system of health insurance, with the US federal government collecting taxes to fund it, and distributing those moneys to pay the health care bills for everybody, passes Constitutional muster.  Phrased as a yes-no question, the plaintiffs' attorney answered that his clients agreed such a system was okay.  The conservative group of justices didn't, at least IMO, seem to care about this.  I suspect that while the conservative justices' opinions as to the Constitutional validity of a program like Medicare may vary, none of them see that as an issue in this case.

Roberts and Kennedy, though, seem to consider this more carefully.  I think they realize that the alternatives to a system in which the private health insurance companies are regulated to function so that they are equivalent to a single-payer system (which could logically subsume programs like Medicare) are (a) largely unregulated individual markets that will be politically untenable in the near future or (b) true single-payer.  And a key portion of making any system of regulation intended to produce the effects of tax-funded single-payer is a universal mandate -- everyone, young or old, healthy or sick, has to participate in the system in order for the numbers to work out.

So at this point in time, what seems the most likely outcome?  If forced to bet, I would bet on a 6-3 decision that says the ACA stands on the grounds that Congress can use regulation of a large existing private sector to implement a program.  Multiple concurring opinions that muddy the waters on the Commerce Clause.  Strong dissenting opinion(s) in the "end of the world as we know it" vein.  I should note that while I make reasonably good predictions about technology in the longish term, I have a terrible record at short-term political forecasts.
Posted by Michael Cain at 3:58 PM No comments:

I seldom feel moved to make comments on politics.  This morning after Super Tuesday, though, I was playing with the LA Times' maps showing county-by-county winners in the Republican primaries.  For the most part, one trend seems very clear: Romney wins urban areas, the other guys win the rural areas.  In Ohio, Romney won on the basis of  Cleveland, Columbus and Cincinnati; Romney lost Tennessee, but won Nashville (and basically a dead heat in Knoxville); Gingrich won Georgia, but Romney won Atlanta; even back in South Carolina, where Gingrich managed to stay in the race, Romney won Columbia and Charleston.

Unlike many, I think the Republican nomination is a done deal now, and Romney has it.  It may take a while for things to play out, but the outcome is pretty much a given.  The several big urban states that haven't held their primaries yet will be decisive: New York, New Jersey, Pennsylvania, Illinois, California.  Santorum has the favorite-son advantage in PA, but the others should be solid Romney victories based on winning in urban areas.  With Rick Perry out of the race, even Texas could be interesting: will Romney win Houston, DFW, San Antonio?

The knock on Romney throughout the primary season has been that he can't "connect" with the Republican Party base.  The maps make it pretty clear that the interpretation of that should be that Romney can't connect with Republican voters outside of the urban areas.  If those voters are the base, the Republican Party ought to be concerned about the map below (originally published by the Texas Tribune).  From 2000 to 2010, metro areas across the country have been growing in population and the rural areas shrinking.  Note that the picture in the West is somewhat misleading because of the physical size of many counties; the population growth in Southern California, Nevada, and Arizona is much more concentrated than the graphic suggests. 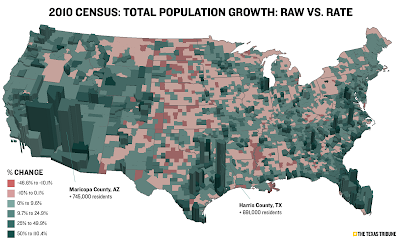 The areas where Romney has been doing well are, of course, also areas where Democrats tend to do well.  Which is the demographic problem the Republicans face.  If you drag up one of red/blue maps for the 2008 Presidential election, most of those same high-growth counties correspond well with counties that Obama won.  The Republicans need a transformation; how do they become a party that is well-regarded by voters in urban areas?  The obvious answer is to promote policies that solve problems in urban areas, although I think that's hard for them.  Too many of their current policy positions are rural-oriented.

As one example, consider high gasoline prices.  I have long argued that high gas prices hit rural areas much harder than they do urban areas.  Average income tends to be higher in urban areas; urban areas are more likely to have alternatives to personal automobiles (eg, mass transit or ride sharing) than rural areas; small high-mileage cars are more practical in an urban setting than a rural one.  Democrats can talk about carbon taxes in order to force gasoline use down, because urban voters have choices.  Even ignoring the current Republican no-new-taxes stance, it's a lot harder for a Republican to propose such a tax because the burden will be heavier on the rural voters, whom the Republican is more likely to represent.

At some point the Republicans have to figure out how to be a conservative urban party, or face becoming irrelevant.  They can fight a holding action in the US Senate because of the current rules that allow a group of 41 Senators to block legislation.  But in the long run, they have to figure out the urban thing.
Posted by Michael Cain at 12:11 PM 1 comment:
Newer Posts Older Posts Home
Subscribe to: Posts (Atom)