From time to time, I write something about failing infrastructure in the US.  Usually, I complain about how I seem to be living in a completely different country than the one some article is describing.  This week, The Atlantic ran a piece about the problem of combined storm and sanitary sewer systems.  Such systems are prone to overflows of raw sewage into nearby rivers and lakes when it rains hard.  One of the links in that article leads to the EPA map shown here, which identifies the largest of the 770 or so combined sewer systems in the US. 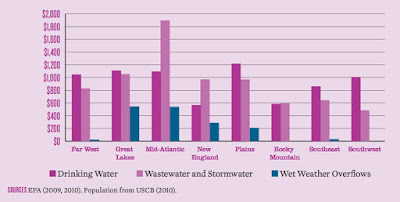 The American Society of Civil Engineers provides annual (very pessimistic) reports on the nation's infrastructure.  Regional cost estimates in their 2013 report reflect the distribution shown in the map: per-capita costs to fix the problems in the Mid-Atlantic, Great Lakes, and New England regions are much higher than other parts of the country.  Those regions plus portions of the Plains region are the only one where the cost of wet weather overflows is a significant part of future water system spending needs.

Correcting the overflows inherent in combined systems is expensive.  Washington, DC is about half-way through a 20-year $2.6B project to eliminate most of the three billion gallons of untreated sewage released into nearby rivers annually.  The project includes boring some 13 miles of 25-foot-wide tunnels at a depth of more than a hundred feet below the city.  Milwaukee has reduced its sewage releases into Lake Michigan by almost 80% by digging a longer, deeper tunnel -- at a cost of over $3B.  Somewhat over half of the cost of the Milwaukee system, which began construction in 1983, was in the form of federal grants.  The federal government has largely discontinued making grants for these purposes, making loans instead.  The EPA estimates that the total cost of upgrading the combined systems across the country to be about $90B; the ASCE estimates are significantly higher.

In many cases, local governments are not going to be able to afford the kinds of construction needed to fix the problems.  Detroit, poster child for the Rust Belt, is an example.  This Scientific American piece summarizes the situation -- bankruptcy, massive debt, shrinking population, and long-term climate predictions that include more frequent heavy-precipitation events.  There will be pressure to turn a local problem into a state one, and state problems into federal ones.  In the future, I believe, such spending will be an increasing source of friction between different regions of the country.
Posted by Michael Cain at 2:54 PM 2 comments:

[2] All three are direct initiative states. There is quite a bit of evidence that having a contentious initiative item on the ballot does increase turnout.
Posted by Michael Cain at 9:41 AM No comments:
Newer Posts Older Posts Home
Subscribe to: Posts (Atom)