A Thought on the EPA's New CO2 Rule 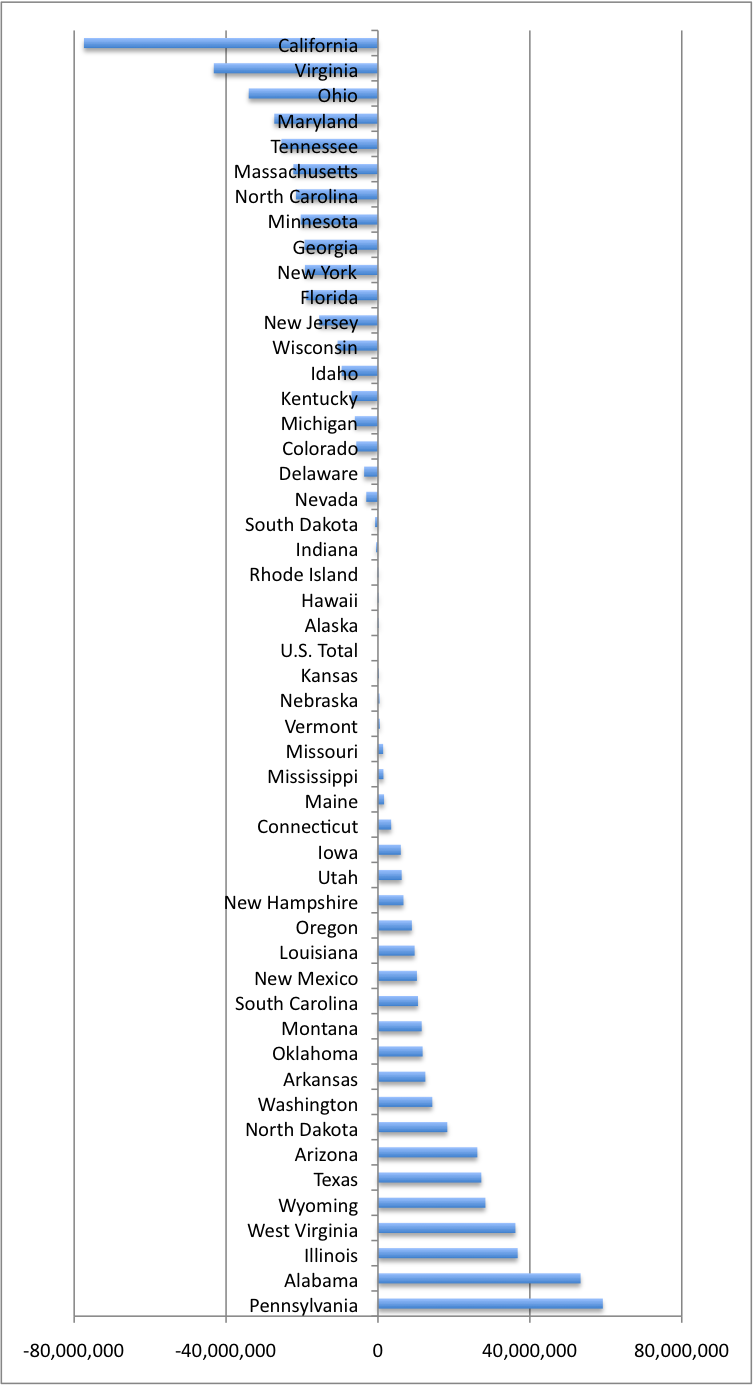 Recently, the US EPA announced its proposed regulation of CO2 emitted by existing power plants.  The proposed rule follows as a consequence of (a) the Supreme Court's finding that greenhouse gases are an air pollutant under the language of the Clean Air Act, and that the EPA is therefore required to regulate it if it is harmful, and (b) the DC Circuit Court's subsequent finding that greenhouse gases are harmful.  Everyone knows that the matter will wind up back in the courts.  Ben Adler at Grist provides a nice summary of the potential legal vulnerabilities of the proposed rule.

As described in an earlier Grist piece, each state will have its own target for reduction of CO2 emissions, and each state will be allowed to develop its own plan for achieving the necessary reduction.  Washington will have to reduce its emissions by about 70%; North Dakota will only have to reduce its emissions by about 10%.  The EPA formula(s) (PDF) for calculating the required emissions targets are complicated and consider a number of factors.

One of the factors that is not included is where the electricity is consumed.  Some states produce more electricity than they consume, others produce less.  The graph to the left shows the approximate net exports for each state, in megawatt-hours [1].  California is at the top, with a negative value indicating they are a large importer of electricity.  Pennsylvania is at the other end of the chart and is the largest exporter.

Tracking exports and imports in more detail can be difficult.  Some cases are relatively straightforward.  Xcel Energy owns the coal-fired Comanche power plant in Pueblo, CO and sells the electricity generated there to consumers up and down the Front Range.  The 1.9 GW coal-fired Intermountain power plant in Utah is owned by utilities in California and Utah.  75% of the plant's output goes by HVDC transmission directly to San Bernardino County, CA; the remainder goes to utilities and electricity cooperatives in Utah.  The coal-fired Jim Bridger power plant in Wyoming is owned by Berkshire Hathaway and sells its output to two utilities operating across six states.  Oregon is one of those states.  Oregon is a net exporter of electricity, primarily hydro electricity sold to utilities in California.  Oregon generates a modest amount of in-state power from coal and imports coal-fired electricity from Wyoming and Utah.

Reducing CO2 emissions will require that money be spent on coal-fired power plants -- on sequestration technology, or on efficiency improvements [2], or on fuel conversions.  That money will eventually be collected from the pocketbooks of electricity consumers.  The fact that there are states that are exporters and importers of electricity would seem, at least to me, to create an opportunity for a certain amount of mischief.  That is, a state's plan for reducing CO2 emissions might be structured so that, as far as is possible, out-of-state consumers pay for the necessary changes.  From the examples in the preceding paragraph, Wyoming and Utah have an interest in getting California and Oregon to foot as much of the bills as possible.  In addition to Ben Adler's list of reasons that the EPA's final rule will end up in court, look for the distinct possibility of some states (and interstate companies) suing other states over their plans.

Myself, I'm in the camp that says, "A carbon tax would have been enormously simpler."  Reality, though, forces me to acknowledge that politics is the art of the possible, that such a tax would be DOA in Congress, and that not allowing Congress to delegate taxes and tax rates to the EPA is a good thing.


[1] Data from the EIA's state electricity profiles for calendar year 2012, total net generation minus total retail sales.  For the US as a whole, net generation exceeds retail sales by about 10%.  Each state's generation figure is scaled down by the US ratio so that the US Total exports comes out zero.