From time to time you find articles that talk about how far behind the United States is in infrastructure spending.  The American Society of Civil Engineers maintains an entire web site dedicated to the topic.  I have often wondered whether there are geographic patterns to the infrastructure shortfalls.  One of the things that raises that question for me is the stuff I read about how the electric grid is falling apart.  In the Denver suburb where I have lived for the last 26 years, and the Front Range generally, there's been an enormous amount invested in the electric grid and service seems to be noticeably improved compared to what it was when I moved here. 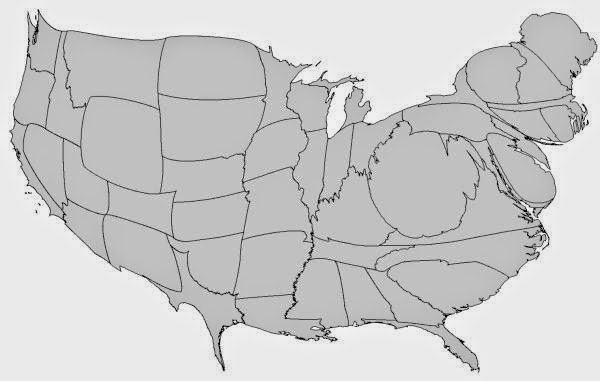 Bloomberg maintains an interesting collection of state-by-state numbers, including infrastructure needs.  They only consider a limited number of things: roads, drinking water, and airports.  I'd like to have figures that included more factors — ah, how pleasant it would be to have minionsgraduate students to do the grunt work — but Bloomberg is an easy-to-use starting point.  The cartogram at left — double-click in most browsers for a larger version — shows US states sized to reflect Bloomberg's figure for annual per-capita infrastructure spending needs for the period 2013-2017.  West Virginia has the largest value at $1,035; New Jersey has the lowest value at $78.  While there are lots of things that would be interesting to regress against the numbers, in this essay I'm just thinking about geography.

One of the obvious things that jumps out is that high-population states do better.  California, New York, Florida, and Illinois all fall into that group.  The most likely reason would seem to be that there are economies of scale involved in the things Bloomberg measures.  An airport can serve more people in a high-population state; highway lane-miles are used by more people; doubling the capacity of a water- or sewage-treatment plant doesn't mean that the cost of the plant will be doubled.

Another factor appears to be that states with high population growth over the last 20 years do better.  California, Colorado, Texas, Georgia and Florida are examples.  In this case, the likely reason would be that rapidly growing populations have made infrastructure spending a critical need.  To use Colorado as an anecdotal case, since I live here and pay some attention, Denver built a major new airport, my suburb greatly expanded its water-treatment plant, and I-25 along the Front Range has been subject to an entire series of improvements (if you drive its length, it's not whether part of it is under construction, it's a matter of how much). 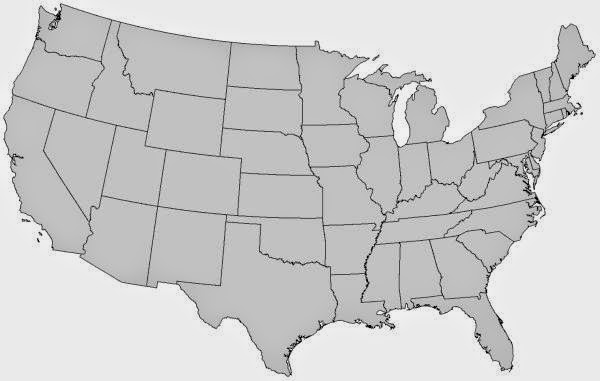 Finally, some simple regional observations. Here's a standard map of the 48 contiguous states using an equal-area projection for comparison.  The 11 contiguous western states appear to be in much better shape than the country as a whole.   As might be expected, Wyoming and Montana, the two western states with the smallest populations, do the worst in that region by a wide margin.  With a caveat that this is state-level data, the upper Great Plains, New England, and Appalachia all do very poorly.  With a small number of exceptions, the East Coast looks particularly bad.