Rail-Oriented Transit in the West 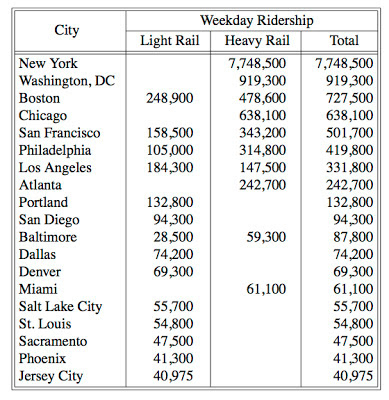 This chart shows the rail-oriented transit systems in the US with the largest daily riderships.  The numbers are taken from Wikipedia pages on light- and heavy-rail transit systems.  The cities listed are the largest in the area served by each system; eg, San Francisco's heavy-rail system extends well down the peninsula to other smaller cities.  I arbitrarily cut the list off at 40,000 riders.  Several of the systems are located in the BosWash corridor, which is not surprising.  Chicago's famous "L" is also high on the list.  The other twelve cities on the list surprised me in one way: eight of them are in the West (defined from the Rocky Mountains to the Pacific coast) and only four of them are in the rest of the country.

The West has a small number of  metropolitan areas with significant populations: Seattle, Portland, the San Francisco Bay area, LA/San Diego, Las Vegas, Phoenix, the Front Range of Colorado, and Salt Lake City.  All of those, with the exception of Las Vegas and Seattle, are on the list.  Seattle fails to make the list because its system has ridership just over 30,000.  Las Vegas's monorail is even smaller, and while there have been proposals to expand the system in either monorail or light rail format, none of those have gone very far.  Some of the Western systems are being expanded.  Denver, for example, has multiple additional lines already under construction that will go into service between 2013 and 2016, that will substantially increase ridership.

The non-West has many more metropolitan areas on the scale of those like Portland or Denver than the West has.  Why aren't there large numbers of light-rail systems growing at the same rate as those in the West?  There are many possible explanations, but I'll put forward my own: growth in the West has taught those cities a lesson that much of the non-West hasn't learned.  From 1990 to 2010, Alabama was a rapidly growing non-Western state; over that same interval, though, it grew at only half the rate of Oregon.  Cities in Ohio, which grew at less than half the rate of Alabama over the same 20 years, would be even farther from proper lesson: at some point, more lane-miles aren't the answer.
Posted by Michael Cain at 6:41 PM