It Ain't Just the Price of Crude

One of the lead stories in Friday's LA Times documents the recent rapid increases in gasoline prices, going above five dollars per gallon in a handful of locations.  While the most recent prices are not yet reflected, the map of gasoline prices in the US shows two regions with significantly higher prices: the West Coast and the Northeast.  While some may claim that these numbers reflect variations in factors such as state gasoline taxes, the reality is quite a bit simpler. 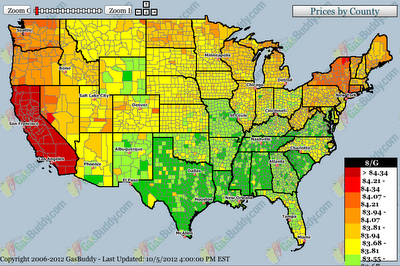 In the last few weeks, a number of refineries in California have been shut down due to accidents or the need for routine maintenance.  Stories have correctly pointed out that the West Coast is, for the most part, not connected to the the large network of pipelines that connect various parts of the country farther east.  Earlier this year, multiple refineries serving New England and the New York/New Jersey Atlantic Coast area closed.  Stories at the time pointed out that pipelines that could deliver product from Gulf Coast or Midwest refineries were already running at capacity.  Shipping gasoline by tanker is relatively inexpensive.  Enough so, that once a Gulf Coast refinery has loaded the tanker, shipping the product to Europe may be more profitable than shipping to the East Cost.

California seems to be the place where we get big demonstrations about what can happen when we don't pay enough attention to the intermediate steps between the raw material and the end consumers of finished energy products.  California's deregulation (well, reregulation would be more accurate) of electricity supplies gave them the electricity crisis of 2000 and 2001.  Some of the key factors in that fiasco involved shut down of generating capacity to create shortages in the finished product.  Enron and others also manipulated limits in the transmission system -- the electrical equivalent of the oil pipeline network -- in order to create shortages and increase prices.

Energy policy can't stop with the production of the raw materials that go into the system.  It has to address the entire system, from well to pump for gasoline, from mine or wind farm to the meter on the outside of your house for electricity.
Posted by Michael Cain at 8:19 PM