A friend of mine wrote an interesting piece for Utility Dive this week.  The basic premise is that the rapid growth of edge generating capacity – think rooftop solar – will outpace the country's transmission and distribution grid's ability to cope with the added complexity.  I'm an advocate of renewable energy supplies, so think it's a question worth considering.  I think of the problem in terms of three questions: (1) Which grid?  (2) Can such a collapse happen?  (3) Will such a collapse be allowed to happen? 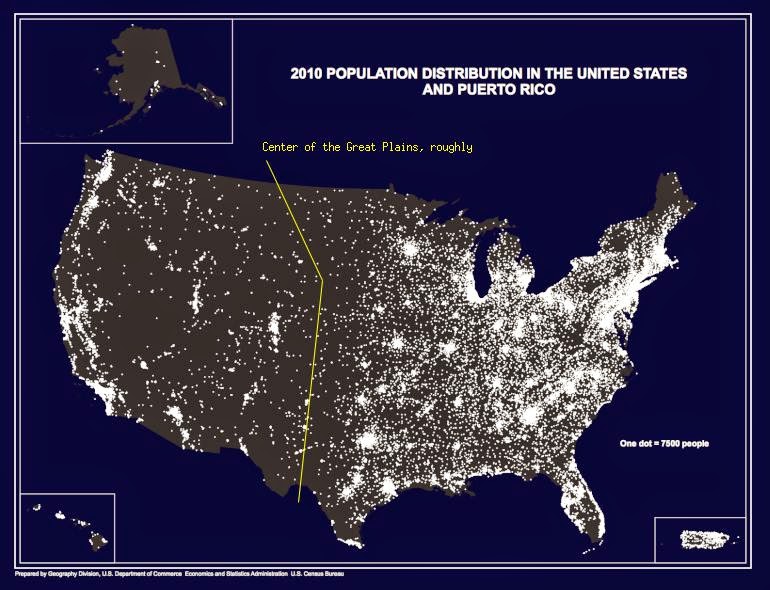 Which grid?  I continue to be disappointed by pieces written as if the US had a single network for transmitting electric power.  There are three: the Eastern, Western, and Texas Interconnects are synchronized AC networks that have minimal AC-DC-AC connections between them.  The history that led to three grids is straightforward.  The Great Plains are a relatively empty buffer nearly 500 miles wide that split the country.  The yellow line on the figure to the left (you should be able to use your browser's "view image" option to see it full size) runs roughly down the middle of the GP, and comes relatively close to the dividing line between Eastern and Western Interconnects.  Texas was able to opt to be its own grid and did so, hoping to avoid federal interference.  Note that El Paso, the only major metro area in Texas that is west of the GP, is part of the Western, rather than Texas, grid.  Each of the three grids has a different degree of complexity, different renewable resource portfolios, and a somewhat different political environment.

Can such a collapse happen?  In order: least likely for the Texas grid; somewhat more so but not a significant risk for the Western grid; quite possible for the Eastern grid.  The fundamental difference is a simple matter of complexity.  The Texas grid serves about 27 million people, and the large majority of the demand is inside the triangle formed by Houston, Dallas-Fort Worth, and San Antonio.  The Western grid serves about 70 million people, and the large majority of demand happens in half-dozen or so large population centers: Seattle-Portland, Northern California around San Francisco Bay, Southern California, Las Vegas, Phoenix-Tucson, Front Range Colorado, and Salt Lake City.  A small number of single-state situations, and limited interconnect problems.  The Eastern grid, covering 205 million people across 36 states, is a whole 'nother matter.  I've written before about the relative complexity of the grids as illustrated by low-carbon studies done by the various national labs.  There are plenty of nuts-and-bolts studies for the Western grid that all come up with similar plans.  Such studies for the Eastern grid simply don't seem to exist because the problem is so much harder.

Will such a collapse be allowed to happen?  In Texas, not just no, but hell no.  A single state legislature, a single PUC; they can regulate the snot out of distributed generation in such a way that it's useful, but not threatening to the collapse of the grid.  In the West, probably not.  Most of the individual Western states have statutory requirements for large renewable share of total supply and are already thinking about intrastate distributed generation.  There are only a couple of interstate grid topologies that make sense.  The Western Governors Association spends considerable effort looking at the regional transmission grid as a whole.  When it comes to the Eastern grid, though, I throw up my hands.  When people write about the US having an aging, third-world, rickety electric grid, they're largely writing about the East.  Too many jurisdictions, too many places to connect... yeah, it could be allowed to happen.

My bottom line is that I acknowledge the risk my friend writes about; I just don't acknowledge that it's a national problem.
Posted by Michael Cain at 12:34 PM