In  a previous post I laid some groundwork for eventually arguing that different parts of the US are following two very different policies with respect to nuclear electricity.  It's not a new topic for me; I've written about the differences in the size of the role nuclear has in powering the three electric grids in the US; that nuclear power is much more important in the Eastern Interconnect than in the Western; and that the evidence provided by plans for new reactors suggest things will continue that way. Over the last several months there have been a number of events that reinforce my thinking on the subject. 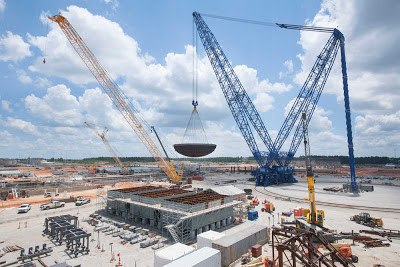 Georgia Power placed the 900-ton bottom portion of the containment vessel for reactor unit 3 at the Vogtle power plant.  Georgia is an ideal example of a state that needs nuclear power.  The state has, at least compared to its growing demand, quite limited undeveloped renewable resources suitable for generating electricity.  For that matter, the state has little in the way of fuel resources, depending on imports of everything.  It always startles me to remember that the 3.5 GW coal-fired Scherer power plant is fueled exclusively with Wyoming Powder River Basin coal that travels 2,100 miles to be burned.  Long supply lines can be fragile.  The 2011 Mississippi, Missouri, and Ohio river floods were only the most recent to create various disruptions in rail transport from west to east.  Nuclear fuel is much more compact and refuelings infrequent.

In a different direction, Southern California Edison notified the Nuclear Regulatory Commission that they will retire the two reactors (half of the California fleet) at the San Onefre power plant rather than repairing them.  The plant was taken offline in January, 2012 when excessive wear in steam-generation tubes resulted in the release of a small amount of radioactive steam.  Last summer, SCE urged conservation and the California independent system operator gave permission for two gas-fired generators to be temporarily restored to service.  Those generators had been shut down as part of a clean-air effort, with plans to replace them with new generators in a better location.

Also in the Western Interconnect, an interesting study of the Columbia Generating Station (the nuclear power plant in Washington State) was published.  The report estimates that the cost to produce electricity at CGS is significantly higher than the price at which the same amount of electricity could have been purchased in the wholesale market.  The report identifies several reasons why that is so, including: it's the only nuclear plant the owner operates, it is located far from the demand centers where its electricity is consumed, and that the region now has a surplus of renewable generating capacity.

On a final note, a number of industrial-scale solar power plants began delivering power to the grid.  These include the 250MW California Valley Solar Ranch (PV); the 130 MW Tenaska Imperial Solar Energy Center South project (PV); and the 392 MW Ivanpah Solar Electric plant (central-tower solar thermal).  Summer 2014 ought to be interesting in Southern California — particularly if it's a hot one — as they try to juggle intermittent renewables and natural gas to balance the decommissioning of San Onefre.


[1] Clean up the ash ponds.  Install new pollution control equipment for fine particulates and various noxious gases.  Potentially, pay a carbon tax or buy emission permits for the CO2.  There are a number of reasons to think that coal-fired electricity will cost more in the future.
Posted by Michael Cain at 3:50 PM