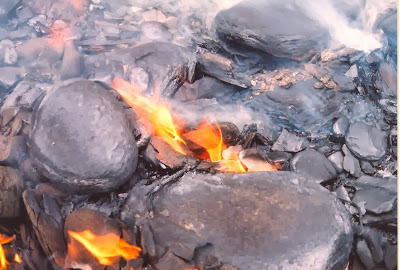 Shell Oil made a couple of interesting announcements last week.  First, they are shutting down their oil shale research facility in Colorado; second, they're going to build a $12.5B gas-to-liquids plant in Louisiana.  The reason given for terminating the shale oil effort was remarkably similar to the reason given by Chevron when they shut down their oil shale research facility in 2012: we think there are much better places to spend our research dollars.

Oil shale should not be mistaken for the tight oil (often called shale oil) whose production from the Bakken formation in North Dakota and the Eagle Ford formation in Texas has been hailed in some quarters as putting the US on the path to becoming self-sufficient in petroleum again.  Those formations are producing actual oil; the oil shale formations in the Green River Basin in Colorado, Utah and Wyoming are rock containing substantial amounts of organic matter (kerogen) that can be turned into something like oil if you bake it for long enough at high enough temperatures.  People have been trying to find some way to produce commercial quantities of near-oil from the oil shale for over a century (unsuccessfully to date).

Most (but not all) of the current generation of proposals for baking the kerogen use large amounts of electricity.  As noted by the Denver Post's announcement of the Shell closure, such schemes would require the construction of one or more very large power plants.  IIRC, at one presentation at the Colorado School of Mines, Shell engineers suggested that a million barrel per day operation would require about the same amount of electricity as currently generated in Colorado.  That's a real problem, given the semi-arid climate and lack of population out in that corner of the state.  Nukes are politically unpopular; other thermal generating technology would require cooling water (or accept lower efficiencies); intermittent renewable resources are a problem for the technology, at least in my mind.  And there's no other customers for the electricity if the oil shale efforts don't pan out.

Hopefully the lesson that Shell and Chevron are teaching here are not lost on the group of politicians who continue to clamor for opening more federal land for developing oil shale.  This is a crappy energy source, ladies and gentlemen.  The experts are unable to produce oil-like liquids from it on a commercial basis.  As a solid fuel, it's so bad it makes lignite look good.  As both Shell and Chevron have indicated, there are better places to put your time, effort, and money.
Posted by Michael Cain at 1:54 PM