One of the frequently cited pieces of oil financial analysis the past few days is a Citigroup report suggesting that Saudi Arabia could become an oil importer by 2030 (eg, Bloomberg's story on the report).  The notion that the Saudis would be consuming all of their production, and then some, is based on extrapolating several trends.  The two fundamental trends are illustrated in the graph below (from Mazama Science's oil export database visualization tool): relatively flat production over the last two decades and steadily increasing internal consumption. 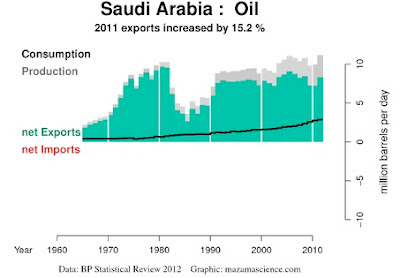 There are a number of reasons to believe the direction of the basic trends will continue.  Books have been written on when the Saudis will reach terminal decline in their production; Simmons' Twilight in the Desert is probably the best known, as well as being one of the most pessimistic.  On the demand side, the Saudis generate almost half of their electricity using oil (a practice the developed countries of the world gave up in the 1970s during the two oil crises); the country's population is young and growing rapidly; and domestic prices for oil products are set well below global market prices.  All of those factors point to growing domestic demand.

The best argument against the notion of the Saudis becoming net oil importers is the enormous role that revenues from oil exports play in the country.  75% of the government's revenues are from oil, and that money pays for many programs including defense, infrastructure development, education, and health care.  This is not spending that the government can simply turn off without serious consequences.  In the absence of increased production, the government needs to maintain a substantial level of oil exports, or rapidly build the non-oil economy, or both.  An additional problem the country faces is the make-up of its work force: a staggering 80% of workers are foreign nationals, not Saudis.

The Saudis appear to be taking some steps to delay the decline in oil-based revenues.  They have signed nuclear deals with all of France, China, Argentina and South Korea.  Commercial reactors would be used in place of oil to generate electricity and desalinate sea water.  The government is also considering construction of a large amounts of solar generating capacity for the same reason.  And for many years the Saudis have been working to move "up the value chain" in order to get more revenue from their petroleum: selling plastics derived from petroleum pays better than selling the petroleum.  Similarly, selling refined products yields more revenue than selling crude oil, and the Saudis have invested in refining capacity at home and overseas.  "Saudiization" of the work force is an official government policy, which might, in theory at least, reduce the population and domestic demand.

Can the Saudis pull all of this off and continue to export at current levels in 2030?  My own opinion is "not a chance."  Will their exports go to zero by 2030?  My thinking is that that also is not going to happen, although the exports may be plastics, chemicals, and finished petroleum products rather than crude oil.  I also think the path to that point is going to be erratic and possibly violent.  A lot has to change, and 23 years isn't a lot of time to accomplish those changes.
Posted by Michael Cain at 10:38 AM