Man, I hate it when I find a bug in software I've been using for some time.  Better to acknowledge the error than to try to cover it up.  I put up an essay on September 5, 2011, comparing the sources used to produce electricity in the states that make up the Western Interconnect and the rest of the contiguous US states.  There were numerical errors in that piece.  The following is a corrected version.


Earlier this year I posted a piece that observed that in the US, nuclear power was largely an Eastern phenomenon.  I was curious about other differences in the sources for electrical power in the East and West portions of the US.  The EIA publishes numbers for electricity generation by state and "fuel".  Several caveats go with the following discussion:

The first thing that jumps out of the aggregate numbers is that the West generates only 17.9% of the total, while the East generates 82.1%.  The West's population, based on June 2007 figures from the Census Bureau, was almost 23% of the population total for the 48 contiguous states, so the share of generation is somewhat less than I had expected.  I can think of a variety of possible reasons for the difference.  In no particular order: more moderate climate; less energy-intense economies (eg, less heavy manufacturing); and newer, more-efficient infrastructure such as housing.

The share provided by the five largest sources of generation for the West and East are shown in the table to the left.  As expected, there are fairly dramatic differences between the two regions.  The East depends much more on coal and nuclear (almost 75% of their total) than the West does (about 40%).  If conventional hydro power is counted as renewable, then the West gets about one-quarter of its electricity from renewable sources.  Western wind, with a value of 0.0181, was close behind geothermal as a renewable source in 2007, and passed geothermal into the fifth spot in 2008 [another update: by 2010, renewables totaled a bit over 28% in the West]. 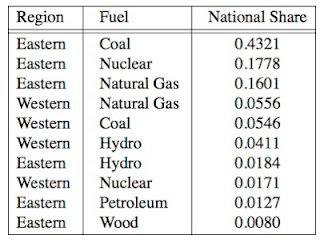 The next table shows the top ten sources of electricity by region and source when measured against the US total.  Depending on your biases, the table is making any of several different points.  I'll stick to the one that says the table shows the need for two distinct energy policies (at least with respect to electricity) in the US, one for the West and one for the East.  The problems of replacing the power from an aging fleet of nuclear reactors is an Eastern problem.  The problems of replacing large amounts of coal generation in order to address climate change issues is an Eastern problem.  When the time comes -- and I believe it will -- when the East requires a heavy dose of austerity, in terms of sizable per-capita reductions in electricity use, it will be difficult to justify imposing exactly the same degree of pain on the West.
Posted by Michael Cain at 3:28 PM