Has Business Bailed on the Social Contract?

Kevin drum has a post this week enumerating what he sees as the list of reasons that have been put forward regarding the difficulties in getting the economy to recover from its current problems.  I want to write about the combination of two of them:

For those who haven't read Tyler's Great Stagnation, one of the basic premises is that before about the mid-1960s we invented lots of stuff that consumers could afford that (a) changed people's lives and (b) created lots of jobs on net.  The classic example is the automobile.  It made a radical difference in personal mobility, and created jobs in building, maintaining, and fueling the darned things.  Similarly for the telephone.  However, if an adult from the mid-1960s were to walk into my house today, perhaps the only thing that is conceptually new is the personal computers and software running on them.  The PC certainly meets the first criteria; whether it has created new jobs on net is less obvious.  PCs have eliminated large numbers of unskilled and low-skilled jobs.  Eliminated jobs not just in the sense that the automobile eliminated jobs for buggy-whips; eliminated jobs for typists, draftsmen, and people in call centers.  And attached to appropriate robots, are eliminating more skilled positions such as welders and machinists.

Since the end of WWII, the US has had an informal social contract, a major feature of which is that in exchange for low regulation and tax rates (relative to the rest of the developed world), business would provide everyone who wanted a job with one that paid an at least marginally living wage (including benefits).  Government actions that enforced this contract included pro-union regulations and enforcement, minimum wages, and so forth.  Business wasn't particularly happy about the situation, but there wasn't much they could do about it either.

Beginning by the mid-1980s, it became increasingly possible for business to "do something about it." Two of the primary factors were automation made possible by ever-cheaper and ever-more-powerful computer hardware and software, and relaxed rules about capital mobility. Recessions, by idling some of the productive capacity, were the ideal time to relocate and automate. "Relocate" could be indirect -- if you make layoffs at plants in both Michigan and Alabama, but later bring only Alabama back up to full output, you've "relocated".  With relaxed rules on capital flows, sites for new factories included Mexico and China. Some argue that illegal immigration was another way for business to get around the social contract, but I'm not convinced it is as important as the other two factors.

One of the results has increasingly been "jobless" recoveries following recessions. If you look at graphs of job losses and recoveries for recessions since WWII, there is a pronounced break in the shape of the curves for the three post 1981-2 recessions.  Calculated Risk provides a nice version of just such a chart on a monthly basis. Particularly given the depth of the last (current?) recession, it is not surprising that the curve looks like it may take a decade for employment to reach the pre-recession level. Current proposals for "fixing" the jobs problem will likely fail because they don't address the lapse of the social contract. 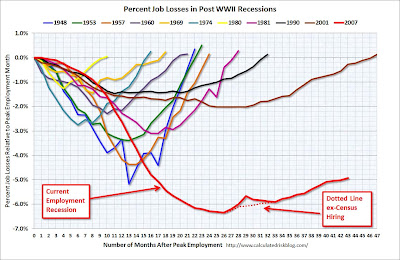 The strong form of number (2) in Drum's list is that there are a significant number of people who want jobs but are worthless from the perspective of an employer.  Item (1) has contributed to that situation -- we are not creating new places in the economy with a large demand for workers.  In addition, the primary innovation of the second half of the 20th century -- cheap processing power and software -- has allowed for the automation of a large number of jobs.  And it certainly appears that business is not being held to the social contract.  The combination is, well, scary.

Substantial adjustments to the social contract have a tendency to be messy affairs.  Consider the French Revolution of the 1790s, the Russian Revolution in 1917, or the transition of the US economy from one based large on agriculture to one heavily into manufacturing over the period of about 1890 to 1930.
Posted by Michael Cain at 10:22 AM