This past week, the national news carried stories about Colorado's Black Forest fire.  Properly so, for news organizations, as two people are known to have died and almost 500 homes been destroyed.  Mostly limited to local coverage has been the Big Meadows fire, burning in Rocky Mountain National Park.  U.S. Forest Service policy these days is to let fires in remote parts of the national park system burn.  In the case of the Big Meadows fire, they opted to contain and extinguish it.  This post is about the reasons that they had to make that decision. 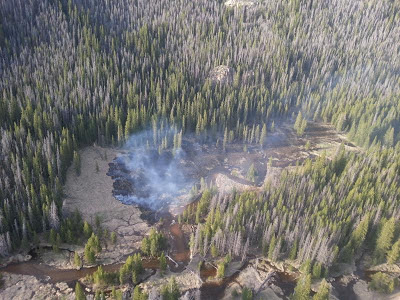 To the left is a picture of one edge of the fire early on.  A much larger version of this picture can be found here.  Two features of the forest shown in the picture are relevant.  First, it's crowded.  Trees are jammed in very tightly.  If one of them is on fire, the trees downwind are very likely going to burn also.  Second, most of the trees are dead.  The dead trees are those gray ones [1].  If you look at the larger version of the picture, where you can see all of the individual trunks, you can see just how many of the trees are dead.  The Mountain West is experiencing an epidemic of various bark beetles that are killing large numbers of trees.  In the area of the Big Meadows fire, an estimated 80% of the trees have been killed.  This is the reason that the Forest Service decided to attempt to put this lightning-started fire out: there's an enormous fuel load, and once strongly established, it may not be possible to limit the spread.

Why so many dead trees?  Foresters and ecologists point to two main factors.  Fire is an important part of the ecosystem in forests in the Mountain West.  Periodic ground fires clear the accumulated material (dropped pine needles and dead branches) and kill off bushes and saplings.  Groves of mature trees survive ground fires without difficulty.  In the first half of the 20th century, the Forest Service and its predecessor agencies ignored this reality and adopted a policy of total fire suppression.  With the saplings no longer being killed, overpopulation resulted.  In addition, those dead limbs and pine needles accumulated on the ground.  Overcrowded trees contribute to the beetle epidemic because the trees are weaker and less able to resist the fungus the beetles spread, and make it easier for the beetles to move from tree to tree.

The second contributor to the epidemic is the weather.  No matter what climate change deniers may say, winters in the mountains are not as cold as they used to be.  Because of their peculiar metabolism [2], a five-day stretch with temperatures below -30 °F are necessary to kill the beetle larvae.  That doesn't happen as often or over as wide an area as it used to, so more beetle larvae survive to adulthood.  Colorado now has over two million acres of forest dominated by beetle-killed trees.  Wyoming and Montana have similar amounts.  All three states are dwarfed by the problem in British Columbia and Alberta, where a total of over 40 million forest acres have been affected.

Mitigation is too difficult and expensive to be practical.  It's unlikely that the Forest Service will be able to go back to total fire-suppression as a policy; how much money do you want to spend to protect stands of dead trees?  The Mountain West is largely screwed on this.  Big fires are coming.


[1] Which means they've been dead for three or more years.  More recently dead trees are a sort of red-brown, and bushier, before they finish dropping the dead needles.

[2] Bark beetle cells include glycerol at particular points in their life cycle, which acts as an antifreeze that keeps cells intact to temperatures well below zero.
Posted by Michael Cain at 11:56 AM